As the push for efficiency, digitalisation and innovation continues to gain traction in the global reinsurance industry, leaders and executives from across the risk transfer and technology sectors are optimistic about the future. 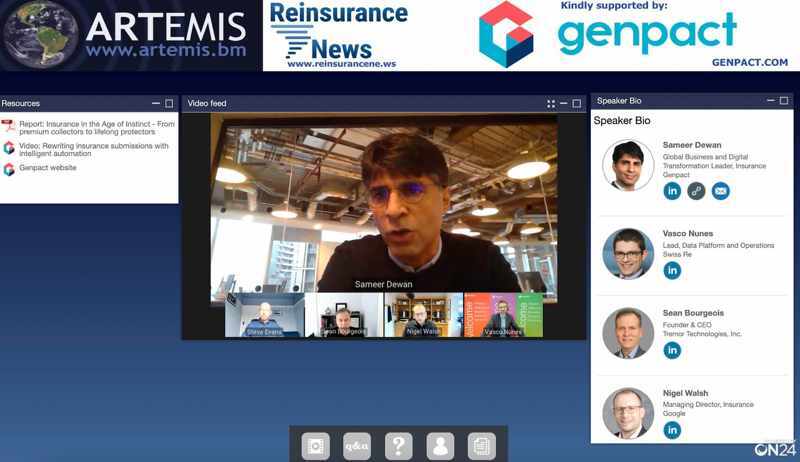 Yesterday, we hosted a live webcast alongside sister publication Artemis, and in association with Genpact, on the use of technology within the reinsurance space and the importance of data.

This insightful discussion, which can be viewed online here, explored the industry’s current use of technology and ability to adopt new processes, with a view to what this might mean for the future of the reinsurance market as it looks to progress and innovate.

“If I was to think about where the industry is and how it has leveraged the opportunities, I think it’s a little bit of a mixed bag, in my view,” said Sameer Dewan, Global Business and Digital Transformation Leader, Insurance, Genpact.

One of the positives, according to Dewan, is that the reinsurance industry in particular has made great strides with its catastrophe risk modelling by leveraging new data sets extensively, and evolving its understanding of natural hazards.

Dewan also noted that solid progress is being made around how the market manages its data and governance, although warned that there’s still a long way to go here.

“What I mean by that, is it’s not just data within the organization that they have across multiple systems, both manual and some more automated processes, but also how data is managed in the ecosystem and how the data transfer plays out. I think that’s a huge opportunity,” he said.

The second piece, he continued, is the under investment in reinsurance core technology.

“There are technologies in play, but I don’t think they necessarily meet the needs of the complexities that we have to deal with today. A lot of the work is still performed manually. Having said that, I think we are at a tipping point,” said Dewan.

The live webcast also featured Vasco Nunes, Lead, Data Platform and Operations, Swiss Re, who senses that now is one of, if not the best opportunity to transform the reinsurance industry.

“One to me is that we see now the strategic relevance of data, tech and digital leadership roles for many companies. So we see that many firms have, for example, appointed Chief Data Officers, Chief Technology Officers, Digital Innovation Officers, and this continues, right, but it’s definitely a strong trend.

“Second element, I would say, is insurers are focusing more on developing these data science teams and basically combining their skills with actuarial expertise, and this is becoming more generalized across the board,” said Nunes.

He continued to note that while we see greater adoption of artificial intelligence and machine learning, access to data in the necessary quantity and quality remains a challenge for many.

“If I reflect on what does this mean for business models, I think there’s two interesting developments. So, one is, the insurance business models are expanding from the highly dominant risk transfer space to also risk management and prevention. And, then, we also see this emergence of ecosystems, platforms, as sort of new distribution and engagement channels,” he said.

He emphasised that while digitisation is happening at the margins, it’s important to understand that “most of the reinsurance market is really not geared up to deploy really robust data lakes, in cleaning massive amounts of data and storing it efficiently, and processing it in really powerful ways.”

However, “this is coming, but it’s not here yet”, he added.

“So, I think, as such, it’s very early innings in the reinsurance industry, technically speaking. With a trillion dollars plus of risk transferring every year really inefficiently, which most in the market will recognize, it’s a matter of time before the industry really begins to adopt modern trading technologies,” said Bourgeois.

The expert panel debate also included Nigel Walsh, Managing Director, Insurance, Google, who said that while technology is certainly a core enablement, on its own it is not the answer.

“And I often wonder, if we would start with a blank sheet of paper, what would it look like? How would we reinvent it so that we’re not stuck with the current process or the current routine, or the current regime or the rules of rigor that we have in place to get through?

“So often I feel that we deployed technology to create a faster horse, and actually what we need is the Model T Ford,” said Walsh.

Watch a replay of the full webcast here.