Re/insurance broker Aon has estimated that Windstorm Ciara (also known as Sabine) will cause industry losses of well above €1 billion (US $1.1 billion), with even larger economic losses. 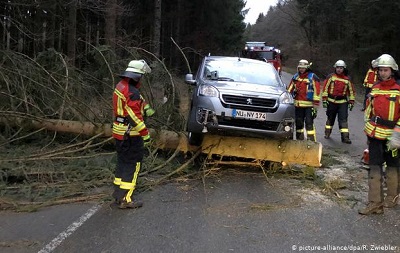 Aon notes that the majority of losses are likely to be centred in Germany, with the General Association of the German Insurance Industry (GDV) having previously estimated insured losses in the country at €675 million.

Catastrophe risk modeller RMS estimated industry losses slightly above Aon’s figure at between €1.1 billion (USD 1.2 billion) and €1.8 billion (USD 1.95 billion), with about 50% of the losses incurred in Germany.

Overall, Aon expects to see in excess of 750,000 insurance claims resulting from the storm, with economic losses of more than US $1.9 billion.

Winter storms also brought severe thunderstorms, flooding and snow to some parts of the US in February, while 37 confirmed tornadoes also touched down across the country.

Among the hardest-hit areas in terms of physical damage occurred in the Southeast – including Mississippi, Alabama, Kentucky, Georgia, South Carolina, and North Carolina.

Aon estimates total economic losses from these US storms at more than $925 million, with insured losses in excess of $675 million.

And in Australia, thunderstorms, strong winds and heavy rainfall resulted in at least 21,000 claims, with payouts of at least AU $100 million (US $67 million).

“February was a meteorologically active month for windstorms in Europe, as no fewer than six notable storms traversed western and central sections of the continent,” said Michal Lorinc, Catastrophe Analyst for Aon’s Impact Forecasting team.

“The most significant was Windstorm Ciara (Sabine), which affected 18 nations and became the costliest storm since Friederike in 2018. Insurers have now noted nearly USD3.0 billion in payouts from the 2019/20 season, which is above this century’s average for the peril though far smaller than peak years in 1990 and 1999,” Lorinc continued.

“Despite being manageable for the industry, the elevated losses continue to serve reminder that robust risk management remains imperative and reliable catastrophe modeling solutions can help with those initiatives.”