Around twenty people from the groups Extinction Rebellion and Debt4Climate occupied this morning the Kongresshaus in Baden-Baden, where the reinsurance industry is currently holding its annual get-together. 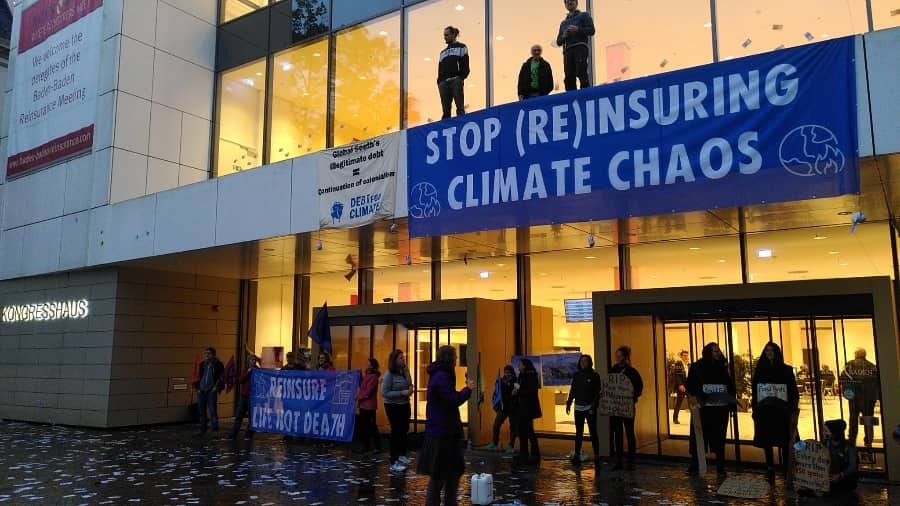 It is understood that the early morning saw a number of activists climbing onto the canopy with a five-metre-long banner saying, Stop (re)insuring Climate Chaos. Other activists glued themselves in front of the entrance doors.

Posters were also taped to the glass facade alleging to show the destruction of ecosystems by the fossil fuel projects insured by conference participants. On the forecourt, activists have spread an oil-like substance and laid on the ground as if dead. They demanded that conference participants stop insuring oil, coal, and gas projects.

The Munich division of Extinction Rebellion put out a statement.

It said: “Given the fundamental and critical role of the reinsurance industry in fossil fuel extraction, the meeting deserves critical attention. Many fossil fuel companies are pushing into new and expanded coal, oil and gas projects, all of which need to be reinsured. At the same time, various studies, including from the International Energy Agency (IEA) and also the latest IPCC report, show that the 1.5-degree target can only be met if we stop burning fossil fuels immediately.”

Susanne Egli, marine biologist and climate activist at Extinction Rebellion, said: “The reinsurance industry is certainly aware of the clear need to stop fueling the climate catastrophe with more fossil fuel projects. There is absolutely no need for the reinsurance industry to insure fossil projects, quite the opposite. Reinsurance even today means billions in climate disaster payouts. Even if the industry doesn’t want to exit the fossil fuel industry in times of climate catastrophe because of millions of lives, it should do so for purely economic reasons.”