The Lloyd’s building at Lime Street in London has been closed this morning, after protesters from climate activist group Extinction Rebellion blockaded entrances. 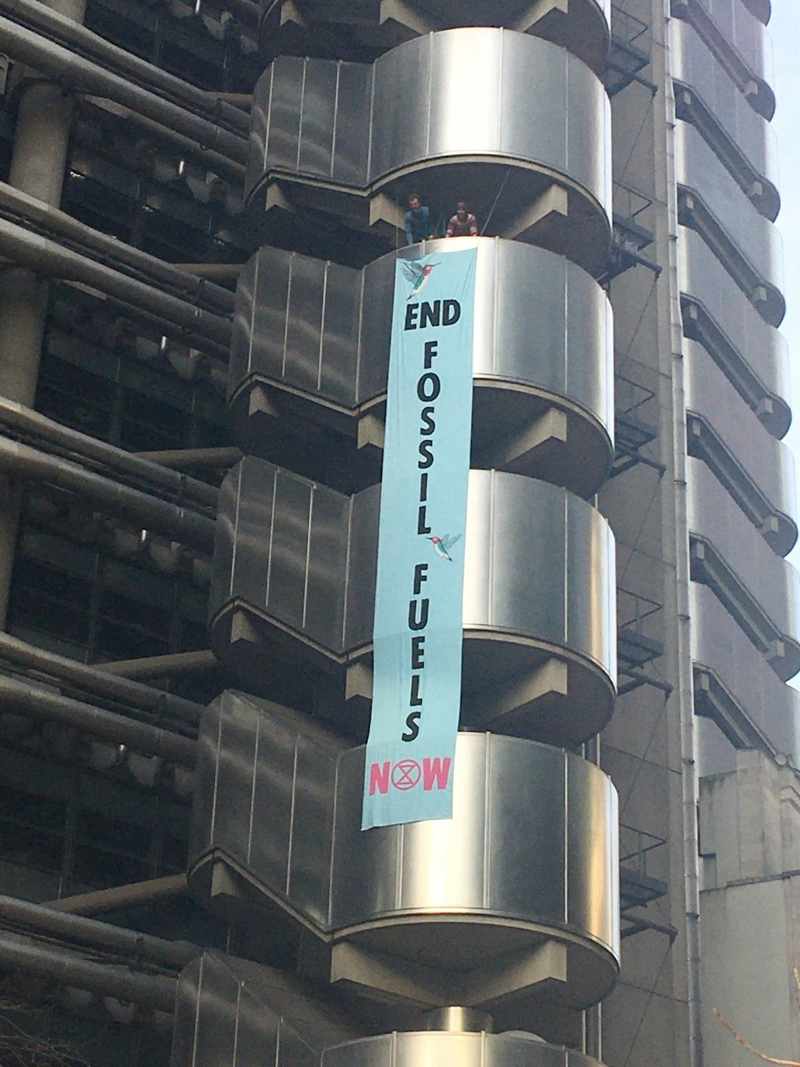 “We are currently unable to enter the Lloyd’s building due to protesters outside,” Lloyd’s said in a statement released at 9.15am this morning.

“In the interests of your safety, please do not approach the Lloyd’s building at present. Instead, please work from other locations for the remainder of the day. If you are already in the building, please leave via the Tower 4 exit,” the insurance and reinsurance market added.

At around 7am this morning more than 60 people from Extinction Rebellion blocked the entrances at Lloyd’s of London headquarters, aiming to prevent staff from entering the building.

“The action aims to close the London based insurance and reinsurance giant for the day,” the activist group said.

“Extinction Rebellion is demanding that Lloyd’s of London stop insuring fossil fuels projects, and highlighted the Trans Mountain Pipeline extension in Canada, which they believe is being insured through the Lloyd’s marketplace,” it added.

More than twenty-five entrances to the Lloyd’s building are said to have been blocked, with protesters using superglue, chains and bike locks.

Staff inside the Lloyd’s building are being allowed to leave.

Clare Walmsley, a spokesperson from Extinction Rebellion, commented, “We’re here to demand an end to all new fossil fuel investments and insurance. By underwriting the world’s most deadly fossil fuel projects, they are creating climate chaos – floods, famine, wildfires and death. Insuring new oil and gas projects in the North Sea, which was part of the government’s energy strategy, does nothing to solve the cost of living crisis. Instead, it locks us into a system that’s already pushing millions into poverty.

“We can see from Lloyd’s long racist history, that it’s always been happy to trade lives for profit. Its business was kickstarted by insuring the trans-Atlantic slave trade. Today its underwriters support projects that sacrifice Indigenous, Black and brown communities on the frontlines of fossil fuel extraction and climate breakdown.”

It’s the latest action against the Lloyd’s insurance and reinsurance market, as activists claim it is being slow to respond to demands to stop providing insurance or reinsurance to projects that are fossil-fuel focused, or deemed negative to the climate.

In an update, Lloyd’s said that the building will remain closed for all of Tuesday, April 12th.

“Following our communications sent earlier this morning, we will be closing the Lloyd’s building at One Lime Street for the rest of the day (Tuesday 12 April). All colleagues, market participants, and tenants should work from home or alternative premises today. Those already working inside the building have been asked to vacate and will be guided safely out by the Lloyd’s security team.”

An end of day update from Lloyd’s said, “As of 4pm on 12 April, all protestors have left the Lloyd’s building and surrounding area.

“We are continuing to work with the City of London Police to ensure the safety of those in and around the building. One Lime Street will remain closed this afternoon.

“We will confirm by 7am tomorrow (Wednesday 13 April) if the building will be open and it is safe to enter.”

Lloyd’s said this morning, “Following yesterday’s protests, we’re pleased to confirm it is now safe to reopen the Lloyd’s building. The building will be open today and all market participants, Corporation staff and tenants are able to fully access and work from One Lime Street.”