Florida’s Citizens Property Insurance Corporation is seeking approximately $2.6 billion of fresh reinsurance protection from its 2021 reinsurance renewal, as the firm prepares to accept almost 150,000 additional policyholders by the end of the year.

Citizens’ Chief Financial Officer (CFO), Jennifer Montero and others are entering into negotiations with both the traditional reinsurance market and the capital markets to ready a proposal prior to the start of the 2021 Atlantic Hurricane Season.

The proposed 2021 risk transfer program includes both Coastal Account and Personal Lines Account (PLA) layers, which, combined, provides Citizens with the ability to absorb a 1-in-100 year storm with no risk of levying assessments while protecting 60% of coastal account reserves, and 32% of PLA reserves.

For the Coastal Account, Citizens intends to transfer roughly $1.715 billion of risk to the global traditional reinsurance markets and the capital markets in 2021. Based on the 2021 program, the total amount of surplus exposed for a 1-in-100 year event in the Coastal Account would be around 40%, or $1.163 billion, explains the firm.

Within the Coastal Account renewal proposal, a Silver Layer would sit alongside the company’s 90% participation in the Florida Hurricane Catastrophe Fund (FHCF) reimbursement program, covering personal residential and commercial residential losses. This layer provides $133 million of annual, per-occurrence coverage in excess of $582 million, and will be placed in the traditional market.

Sitting above the Silver Layer and the FHCF, is annual, per-occurrence layer providing $100 million of protection for personal residential and commercial residential losses. This layer attaches after $715 million of losses and will also be placed in the traditional market.

Above this is an additional $250 million single-year, aggregate layer of coverage for personal residential and commercial residential losses which attaches after $582 million of losses, again being placed in the traditional reinsurance marketplace.

On top of this layer sits the fourth layer of the 2021 Coastal Account program, a single-year, aggregate layer providing $382 million of reinsurance coverage for personal residential and commercial residential losses. This layer attaches after losses of $815 million and will also be placed in the traditional market.

Alongside layer 1 and adjacent to layers 2, 3, and 4 will sit two capital markets layers, both of which amount to $300 million for a combined $600 million of capital markets backed reinsurance protection split into two-tranches. These tranches cover multi-year, annual aggregate personal residential and commercial residential losses and will attach after losses of $2.014 billion.

The proposed Coastal Account reinsurance tower can be seen below. 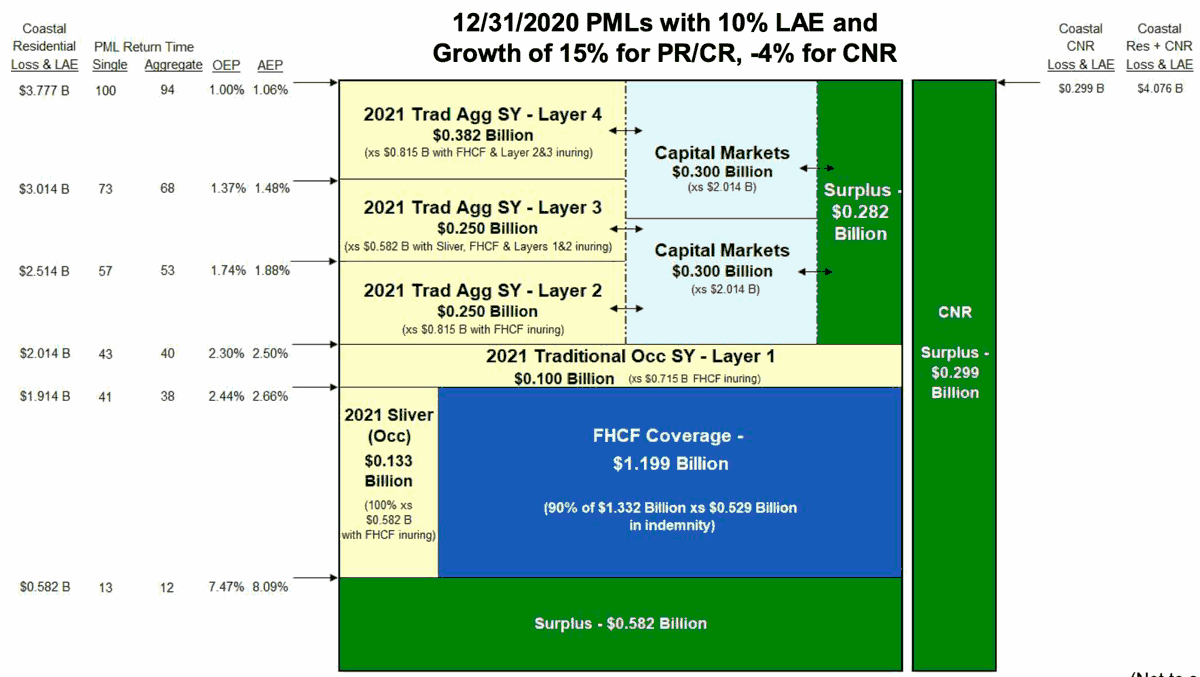 For its PLA renewal, Citizens is targeting the transfer of $926 million of exposure to the traditional market and capital markets in 2021.

The firm explains that based on the proposed 2021 risk transfer program, the total amount of surplus exposed for a 1-in-100 year event in the PLA would be approximately 68%, or $1.164 billion.

For the PLA program, a Silver Layer will sit alongside the FHCF, providing roughly $166 million in excess of $726 million of annual, per-occurrence reinsurance protection which covers personal residential losses, and which was placed in the traditional market.

Above this sits layer 2 of the proposed PLA risk transfer program for 2021, which provides $760 million of coverage from both the traditional markets and the capital markets.

This layer is comprised of the firm’s May 2020, $110 million Everglades Re II Ltd. (Series 2020-2) catastrophe bond transaction. This multi-year, aggregate layer provides protection for personal residential losses and attaches at $1.198 billion.

Additionally, layer 2 of the PLA program includes a further $250 million of multi-year, aggregate coverage for personal residential losses via its 2018 catastrophe bond transaction, which also attaches after $1.198 billion of losses.

Complementing the catastrophe bond transactions, the PLA program in 2021 will also feature a single-year, per-occurrence traditional market placement designed to provide $250 million of protection for personal residential losses, attaching after $726 million of losses.

Lastly, Citizens will seek to secure an additional single-year, aggregate placement that will provide $150 million of coverage for personal residential losses and will attach at $726 million. This slice of protection will be placed in the traditional reinsurance market.

The proposed PLA reinsurance tower can be seen below.

Since 2015, Citizens has experienced operating losses but has managed to offset these with investment income earned from its $6.4 billion of reserves.

The company warns that while it remains financially sound, such a scenario is simply unsustainable and heightens the risk of assessments on all Florida property, auto, and other insurance policyholders.

“We are in a place that we have to make some hard decisions or think about ways we can solve this problem. We must not become a burden on the people of Florida,” said Citizens Board Chairman, Carlos Beruff.

Over the past year, the firm’s policy count had expanded by more than 26% to 551,613, with Citizens now receiving over 3,000 new customers each week. The expansion is being driven by issues in the Florida property market.

“As part of its efforts to prevent assessments, Citizens will seek approximately $2.6 billion in reinsurance coverage for the 2021 hurricane season to protect surplus while its policy count continues to grow,” explains the company.

Property information and analytics provider CoreLogic has written to CoStar asking the company to increase the value of its acquisition...