Henriette Reker, who’s served as the Mayor of Cologne since 2015, made the case for Cologne as a suitable home to EU-servicing re/insurers seeking post-Brexit refuge, offering UK and international re/insurers a post-Brexit home in a meeting this week with industry representatives. 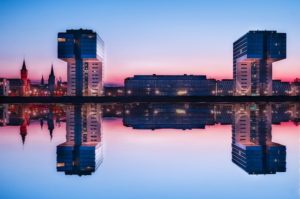 As one of Germany’s leading insurance centres, Cologne already boasts being home to well over 10% of all German insurers as well as 20 international insurers. Furthermore, Cologne Re, the world’s first reinsurance company, which is now part of Warren Buffett’s Berkshire Hathaway, was established in Cologne in 1846.

“Clearly many insurers and reinsurers have chosen established and alternative EU-based insurance centres such as Luxemburg and Dublin to continue doing business in the EU post Brexit. But, we would argue that Cologne offers a fantastic long-term option for UK and international insurers and reinsurers that are serious about the EU market and want to offer their customers real service on the ground.

“We are situated in the heart of one of Europe’s biggest insurance and reinsurance markets here in Germany,have the skilled people,support services and international outlook needed for this most international of businesses and, with the creation of ‘InsurLabGermany’ here in Cologne,are right at the cutting edge of the future of the risk transfer business in Europe. Customers of insurers and reinsurers based here in Cologne can also be assured of the highest standards of regulatory oversight provided by the national German insurance supervisor the BaFin,” said Reker.

Many global re/insurers had previously chosen London as an EU entry point, but have now moved quickly to set up new bases within the EU to ensure post-Brexit continuity, with Brussels, Luxembourg and Dublin being among popular options.

Insurance executive and consultant to the City of Cologne on the project, Reiner Gleiss, added; “Cologne is the biggest city in the Rhein-Ruhrregion that has 11 million inhabitants, accounts for 15% of German GDP and boasts the 16th largest GDP in the world. This city has a strong reputation for innovation.

“It has a long and rich history of insurance, a highly skilled workforce and the infrastructure needed to support the growth and development of this critical sector. We are very excited to show the London and international insurance and reinsurance market what Cologne has to offer.”

Although no single reinsurance hub has so far emerged to challenge the London market, some industry experts believe this will happen gradually over time as long-established re/insurance infrastructure is slowly dismantled.