Data from financial services advisory PeriStrat shows that total tracked public loss estimates from re/insurers are now approaching the low-end of market loss estimates, which range from $30 billion to $80 billion.

Additionally, the ongoing pandemic situation is expected to drive further event cancellation losses throughout 2021, while GTLP and D&O losses could also extend the tail of the loss development pattern.

Currently, PeriStrat continues to forecast total re/insured COVID losses at below $50 billion, meaning another potential $20 billion could be reported in Q4 or later, in its opinion.

Readers can view an up-to-date table of all reported re/insurance losses so far here. 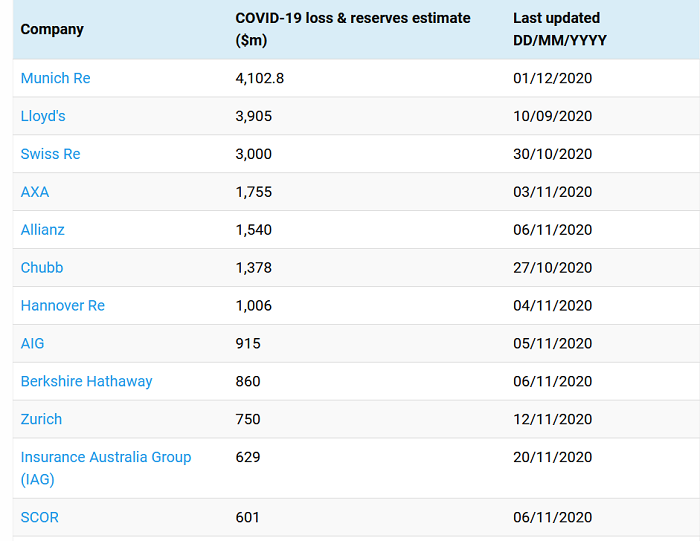 So far, fears about re/insurers’ responsibility for business interruption losses have not materialised in the US, where courts have largely sided with the case made by the re/insurance industry.

But in the UK and Australia, landmark legal rulings against re/insurers could add substantial COVID losses to their results next year.

And in the US too, there are some who view the recent rulings against Cincinnati Financial and Lloyd’s underwriters in Louisiana as a potential turning point for the BI debate.

PeriStrat further noted that Allianz recently warned its catastrophe reinsurers that significant losses from a pandemic BI case could mark a pivotal point for losses starting to filter down from insurance to next levels of risk sharing.

There also continue to be concerns about how future losses from the pandemic will be treated by reinsurers.

For instance, it’s possible that another wave of infections and its associated lockdown orders could either by treated as additional losses still up for aggregation, or as a separate event entirely.

“The assessment of the event aggregation language under reinsurance contracts reveals material differences in how Covid-19 might make its way into reinsurance recoverables,” PeriStrat concluded.