When compared to some of its peers, reinsurance giant Munich Re has an impressive track record on regular dividends, enabling the firm to maintain payouts to investors even in the event of a large insurance industry loss, says RBC Capital Markets.

In the period 2000 to 2016 Germany domiciled reinsurer Munich Re increased its regular dividend by 13% CAGR, compared with 7% growth at Hannover Re and 4% at Swiss Re. RBC Capital Markets, in a recent report, explains that during periods of reduced earnings and market volatility Munich Re avoided the need to reduce its dividend by not being “overly aggressive” on dividend payouts to investors. 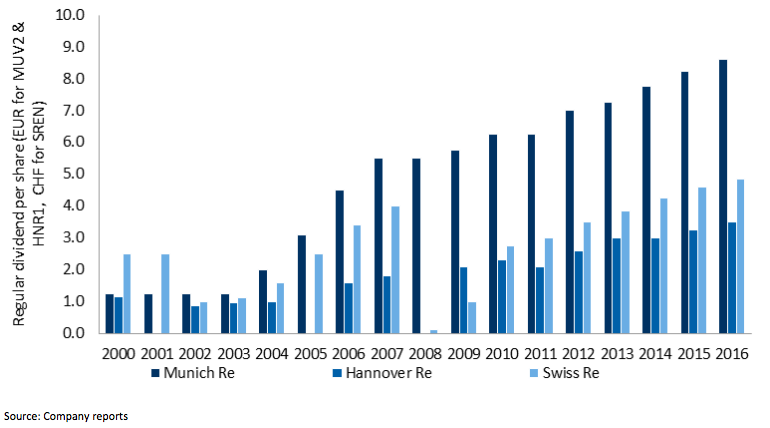 As shown by the above chart, the sustainable, regular dividend payout to investors by Munich Re is significantly higher than some of its peers. RBC explains that although Munich Re’s dividend yield is similar to its peers, it would question if this takes into account the company’s long and impressive track record.

“A number of peers are holding back on returning surplus capital too quickly, in order to develop dividend track records similar to Munich Re.

“We believe that management at Munich Re are keen to sustain their dividend pay out to investors even in times of shocks to markets and in the event of large insurance related losses,” says RBC.

RBC explains; “the buyback helps to neutralise the impact of a growing dividend and also reduces the per share impact of the softening reinsurance market on Munich Re’s earnings.”

Looking forward, RBC notes that Munich Re’s ability to return capital to shareholders is somewhat limited by German GAAP accounting practices, but based on RBC’s calculations, by the end of 2017E, the reinsurer should have some €4.9 billion of distributable earnings under German GAAP.

“€4.9 billion of distributable earnings gives the company more than 2 years cover for he regular dividend and share buyback.

“Whilst we do not expect to see an uptick in the amount of the capital distributions, this does leave the potential open to the new CEO at the end of his first year running the company to increase the share buyback,” says RBC.

Of course while returning capital can be perceived as discipline and pleases shareholders, it can also be looked on as an effect of the softened, more challenging and very competitive market, meaning even Munich Re find’s it hard to put excess capital to work.