Reinsurance buyers found favourable terms at the 1st April 2017 renewals, as record levels of reinsurance capital kept pressure on pricing and provided plenty of capacity to fulfill buyers needs, according to Aon Benfield.

In its latest Reinsurance Market Outlook report, the broker explained that the high-levels of reinsurance capital continue to support buyers needs for risk transfer and also to support geographic expansion and product growth.

Demand for reinsurance capacity continues to increase as well, with buyers recognising the value of reinsurance capital as the world’s risk-capital regimes proliferate.

Reinsurance capital reached a new all-time high at an estimated $595 billion, according to Aon Benfield, with alternative capital a meaningful $81 billion of the market. 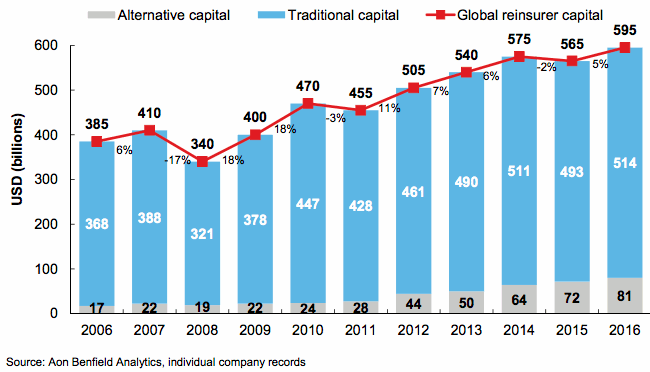 Capital increased by 5% during 2016, a faster rate than seen the year before but slightly below 2013 and 2014’s rate of increase. However, Aon Benfield notes that there remains ample capacity to meet demand for reinsurance cover.

Solid reinsurer earnings helped to drive continued growth, with Aon’s measure of reinsurer profitability showing an average return on equity of 8.4% in 2016. However, the combined ratio is up, the investment return down, return on equity lower and valuations also slightly down, compared to the prior year, so pressure on reinsurers is increasing.

Looking ahead, the prospects for the reinsurance market at the mid-year renewals in June and July look likely to involve more rate declines, according to Aon Benfield, as the company forecasts “ceding companies likely to achieve improvements in pricing, terms and conditions.”

Swiss Re Corporate Solutions, the commercial insurance arm of global players Swiss Re, has appointed Luciano Calheiros as CEO of...