The flooding and inland storms that impacted parts of western and southern Europe in November are likely to drive multi-billion-dollar economic losses, according to re/insurance broker Aon. 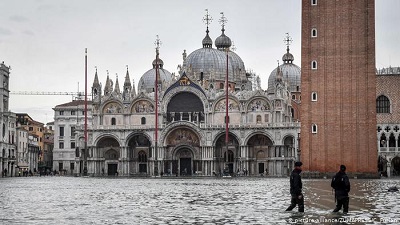 The economic impact in Italy alone is expected to near $2 billion, Aon said in its Global Catastrophe Recap report for the month, with parts of Austria, France and England also bracing for heavy losses.

Aon considers Italy to be the worst hit by the severe weather, with Venice in particular experiencing its second highest tide on record since 1923.

Aggregated economic losses in Italy, including the effects of tidal flooding in Venice, were tentatively estimated at €1.7 billion ($1.9 billion).

Meanwhile, insurers in Austria are citing losses reaching well into the tens of millions of euros, and additional flooding in events in France, Italy and England are likely to exceed $1.0 billion in economic damages.

“The flood peril has also recently been active across East Africa as excessive rainfall and flooding has led to significant humanitarian impacts. The issue of financial maturity remains an important topic in different parts of the world,” Lorinc continued.

“The insurance industry is expected to play an even more integral role in helping to introduce sustainable and tailored products and solutions to further promote resilience and preparedness.”

Other major catastrophes in November included devastating bush fires in Australia, which have driven at least 1,525 claims and insured losses of AUD 165 million (USD 112 million) at present count.

Queensland in Australia was also hit by a destructive hailstorm that has resulted in 16,000 claims and insured losses of AUD 120 million (USD 82 million).

Aon also highlighted the impact of three winter storms in the US, which are expected to drive insured losses of at least USD 100 million, as well as a strong storm system in Canada, where economic losses are thought to be as high as CAD 365 million (USD 275 million).

Additionally, heavy rains have caused flooding and landslides in Columbia, where 43 homes were destroyed and 4,607 damaged, while an earthquake in Albania collapsed at least 1,183 structures and damaged another 10,000.

In South Africa, at least 150,000 farms have been affected by a worsening drought situation, which has led to economic costs of nearly ZAR 2.0 billion (USD135 million).

The government of the Philippines is seeking reinsurance protection for a new National Indemnity Insurance Program, designed to provide PhP...