Flooding this week in parts of southeastern France and northwestern Italy along the Mediterranean coast is likely to drive economic losses in the hundreds of millions of euros range, if not higher, according to re/insurance broker Aon. 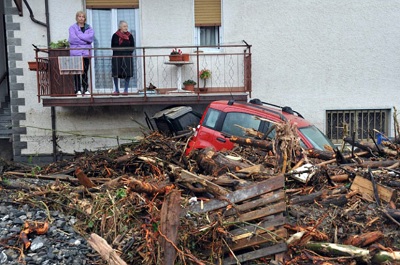 Aftermath of the flooding in Brugnato, Liguria. Source: EPA/LUCA ZENNARO

Parts of France and Italy were hit with torrential rains between November 21 and 24 as a Mediterranean episode brought intense storms, flash flooding and landslides.

Aon expects the flooding in particular to result in “notable economic and insured losses,” based on preliminary estimates from both public and private entities.

In Italy, the Piemonte, Liguria and Lombardia regions were badly affected, with notable inundation along the Ticino, Bormida, Tanaro, Stura, Ellero, Belbo Rivers and elsewhere.

In Piemonte, 653 people were evacuated and hundreds left isolated, with many roads closed due to landslides. Infrastructural damage in the region is estimated at minimally €80 million (US $88 million).

Local officials in the Liguria region of Italy preliminarily estimated structural damages in the region at €480 million ($528 million), which includes urgent expenditure needs regarding the damaged road infrastructure.

Officials expect to see “considerable damage” in the aftermath of the flooding, which left some 4,000 homes without power and caused disruption in railway and road transport.

Additional flooding on the Allier River also hit Haute-Loire and Puy-deDome, and at least 80 homes were flooded in Brassac-les-Mines.