Global insured losses from catastrophes above average at $39bn in H1 2022: Aon

Data from insurance and reinsurance broker Aon finds that globally, insured losses from natural disaster events totalled $39 billion in the first half of 2022, which is roughly 18% above the 21st Century average.

In contrast to the above average volume of catastrophe losses experienced in the six-month period, global economic losses from natural disasters are preliminary down 24% on the 21st Century average of $121 billion, at $92 billion.

This is all according to Aon’s First Half of 2022 Global Catastrophe Recap, which, examines a period marked by large-scale disasters on almost every continent, which ultimately resulted in above-average losses for the re/insurance sector.

“The first half also saw brand new complexities added to the event response process (including higher replacement costs and reinsurance placements) that were influenced by challenging outside societal and financial factors – notably the war in Ukraine and the highest inflation seen in decades,” says Aon.

In terms of insured losses, persistent severe convective storm (SCS) activity, notably in the U.S. and Europe, was a key driver in H1 2022, according to Aon.

All in all, the broker has recorded at least nine separate billion-dollar insured events in the opening six months of 2022, all but one of which were weather-related. Further, at least 20 events were recorded with at least $500 million in insured losses, which Aon says ties H1 2022 with 2011 as the second highest H1 total this century, behind only the 24 seen in H1 2020. 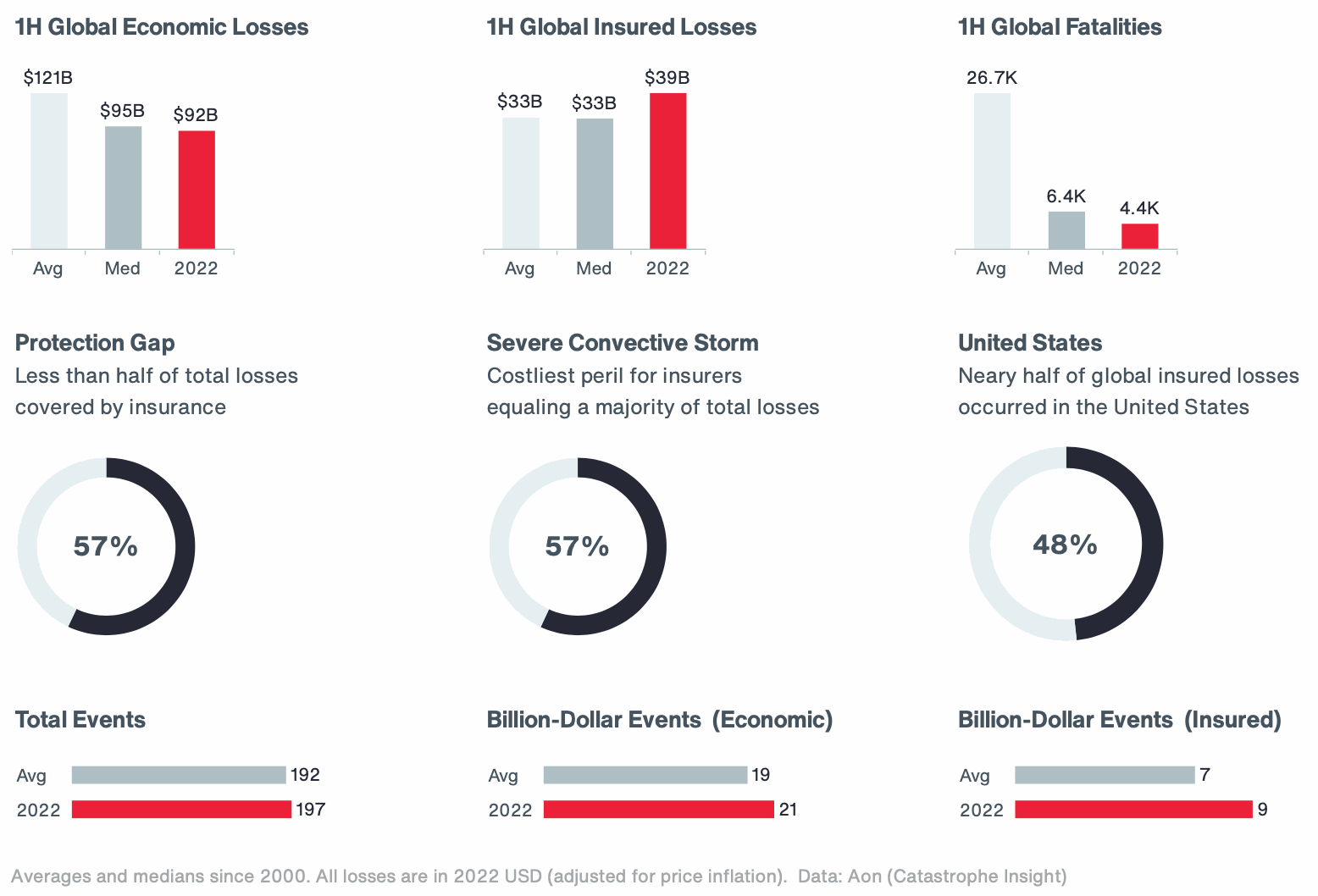 Looking at economic losses, which at $92 billion shows that the protection gap was around 57% – meaning that more than half of all economic losses suffered from nat cat events were not covered by insurance in H1 2022 – Aon notes 21 individual billion-dollar economic loss events. Again, all but one of these were weather-related, with the exception being the March 16th earthquake near the coast of Japan.

The nine billion-dollar events experienced in the U.S. in the period makes it the most active region, followed by seven in the EMEA, three in the APAC region, and two in the Americas.

Commenting on the H1 2022 loss figures, Aon warns: “It is anticipated that there will be robust loss development in most regions, as the cost(s) associated with seasonal monsoon flooding, drought, and severe convective storm events are fully realized.”

In its extensive report, the insurance and reinsurance broker explains that “the fingerprints of climate change continued to become more evident in individual event behavior and longer-term temperature and precipitation trends in 1H 2022.”

“Warmer than average temperatures were cited across a broad swath of the globe which aided in more unusual weather patterns that were already set in motion by the primary influence of La Niña conditions which have been ongoing for nearly three consecutive years,” adds the firm.

Looking ahead to the second-half of the year, Aon emphasises that Q3 is often the costliest quarter of the year, and with forecasters predicting an above-average level of activity during the Atlantic hurricane season, Q4 has the potential to be costly for the industry as well.

“Elevated wildfire activity and the continual threat of severe convective storms will also require close monitoring. With inflationary pressure adding greater costs to supply and labor combining with more impactful disasters, it is anticipated that another challenging round of re/insurance renewals will be forthcoming,” says Aon.