Aon has reported that the level of global reinsurance capital remained unchanged through the first quarter of 2021, relative to the end of 2020, as growth in alternative capital offset a small reduction in traditional capital.

To reach this equilibrium, alternative capital filled a $2 billion dollar decline in traditional capital to end Q1 at $96 billion and $554 billion, respectively. 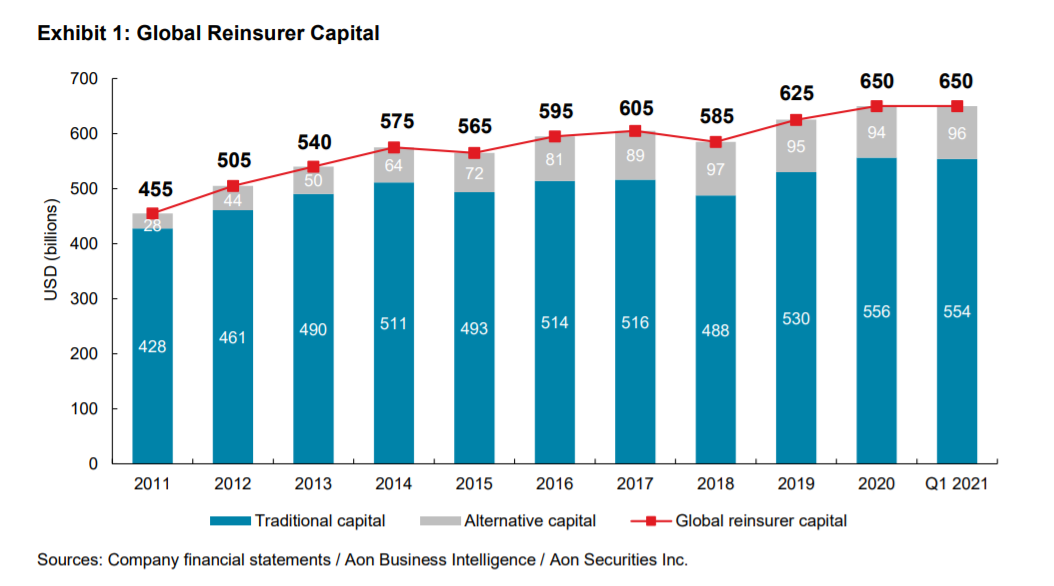 Despite the decline in traditional capital, reinsurers reported solid earnings through the quarter, as previous rate increases outweighed the impact of the Texas winter storms and the booking of additional losses relating to COVID-19, mainly on the life side.

Aon estimates the sector combined ratio at 96.6%, with an annualized return on equity of 10.4% as investment returns benefit from strong stock market performance.

However, analysts noted that the June and July renewals saw momentum slow compared to January, especially for non loss-impacted placements, as contract terms and exclusions continue to remain a central focus.

Turning to the alternative capital sector, Aon noted that assets under management grew by around $4 billion over the previous three quarters to reach the level of $96 billion at Q1 end.

These strong inflows helped the ILS market close out a very strong first half of 2021 as the market demonstrated “strength on strength,” combining near record issuance volume with spread reductions of 10 to 15 percent compared to mid-year 2020.

First half issuance this year totaled $8.39 billion, just shy of the record set in 2017, and this positive capacity and pricing environment has led to impressive breadth across the ILS market.

“A diverse set of Sponsors, including corporates, insurers, reinsurers and government entities have found value in the ILS market across a broad range of perils, geographies, trigger types and expected loss levels,” Aon noted.

Looking ahead, analysts conjectured that the positive market momentum, combined with over $3.5 billion maturing in the second half of 2021, could lead to record issuance volume for the full year.

Low claims levels of claims over the past year due to COVID lockdowns have resulted in a third consecutive quarter...