Gov’s contribution to insured losses under TRIA would decline over time, says report

If the September 11th, 2001 attacks on the World Trade Centre were to happen today, the implementation of the Terrorism Risk Insurance Act (TRIA) would see the government’s net payout fall below zero, according to the Insurance Information Institute (Triple-I).

Analysis by Triple-I, which leverages data and analysis from the Reinsurance Association of America (RAA), on the development of the terror risk insurance market following the September 2001 attacks, explores how the U.S. government’s TRIA program would financially handle the same attack both today, and in the future.

TRIA was signed into law in 2002 in the wake of the 9/11 attacks, designed to serve as a federal backstop for insurance claims related to acts of terror. The program is set to expire at the end of 2020, which has led insurers and reinsurers to call for the act to be extended.

Triple-I has produced several estimates of how 9/11 losses would be covered under TRIA had the event occurred in 2019, 2020, 2029, and 2030, which reveals that over time, the government’s payments decline while the amount assumed by insurers and policyholders increases.

Ultimately, the analysis shows that since 9/11, the terrorism market for insurance has improved, but that the private market still needs the assistance of a government backstop. 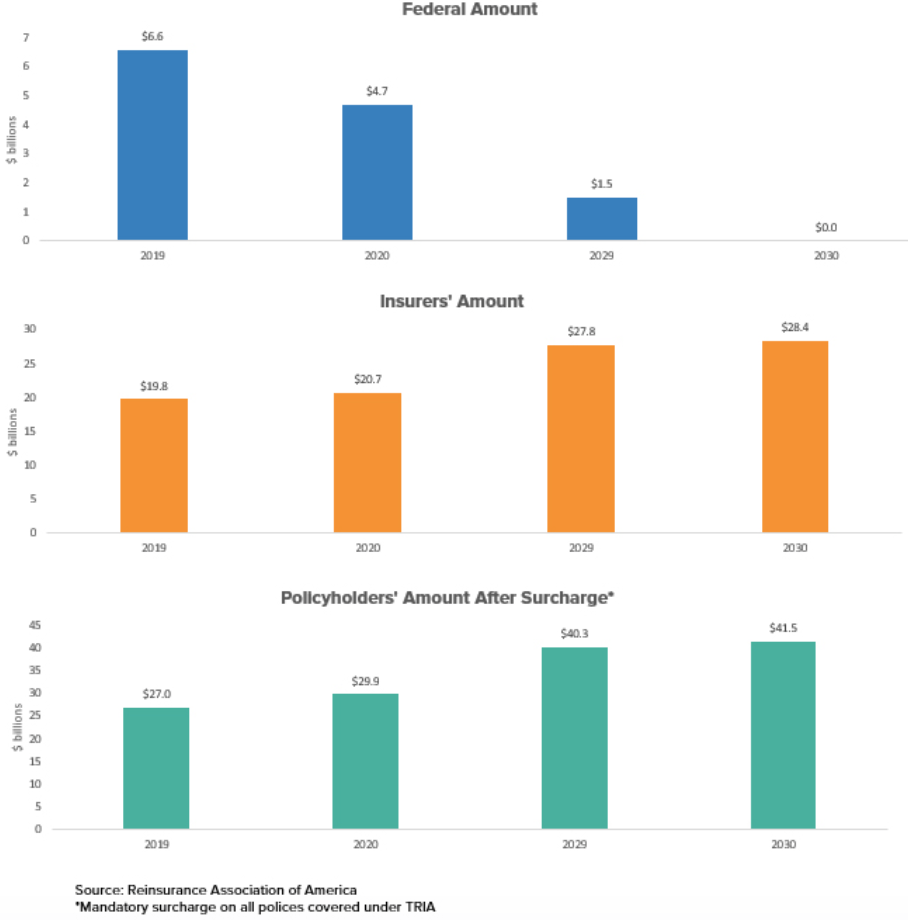 The above chart, provided by the RAA, shows that were the same attack to happen today, the government would contribute $6.6 billion to an overall insurance industry loss of $45.7 billion, and would front a further $19.3 billion. However, the government would also recover $27 billion from mandatory surcharge that would be placed on the insurance purchased, which means that net, the government would pay less than zero. At the same time, insurers would assume $19.8 billion, or 43% of the total insured loss.

As the chart shows, repeating the exercise in the future, assuming that TRIA is reauthorised with the same terms under which it is set to expire at the end of next year, the government contribution declines before reaching zero in 2030, while the insurers’ and policyholder contribution increases, reaching $28.4 billion and $41.5 billion in 2030, respectively.

Triple-I explains that it requested RAA to create the four scenarios, adding that losses were adjusted using the Consumer Price Index, while insurer premium was adjusted by a 4% compound rate of growth.

According to Triple-I, the main drivers of the changes includes the fact that the law makes the size of the industry marketplace retention a function of insurers’ aggregate premiums, meaning that the marketplace retention grows as the industry’s premium does; the fact that in 2020 the government’s co-payment amount declines from 81 cents per dollar insurers pay above their deductible, to 80 cents; and, that the amount of losses subject to policyholder surcharges increases, effectively shrinking government support.

President of the RAA, Frank Nutter, notes that this “is a reminder under the current statute, policyholder and company retentions go up over time. In 2020 this becomes effective in a way that changes retentions of the private sector. It also shows a vanishing federal share.”

RGAX partners with Mutual of Omaha on blockchain-powered workflows

RGAX, a subsidiary of Reinsurance Group of America, Incorporated, has partnered with primary carrier Mutual of Omaha to explore reinsurance...