Hurricane Florence could cause insured losses of $20bn, says RMS

Insured losses from Hurricane Florence, the Category 4 storm currently bearing down on the U.S east coast, could cause insured losses of between $15 billion and $20 billion, according to catastrophe modeller Risk Management Solutions (RMS).

Current projections show that Hurricane Florence is likely to exceed a Category 4 storm and make landfall near Wilmington, North Carolina, late on Thursday this week.

The table below from CoreLogic shows the total number of properties at risk of storm surge for each of the five hurricane categories, as well as their accompanying RCV totals, for areas along the North Carolina, South Carolina and Virginia coast most likely to be affected by Hurricane Florence. 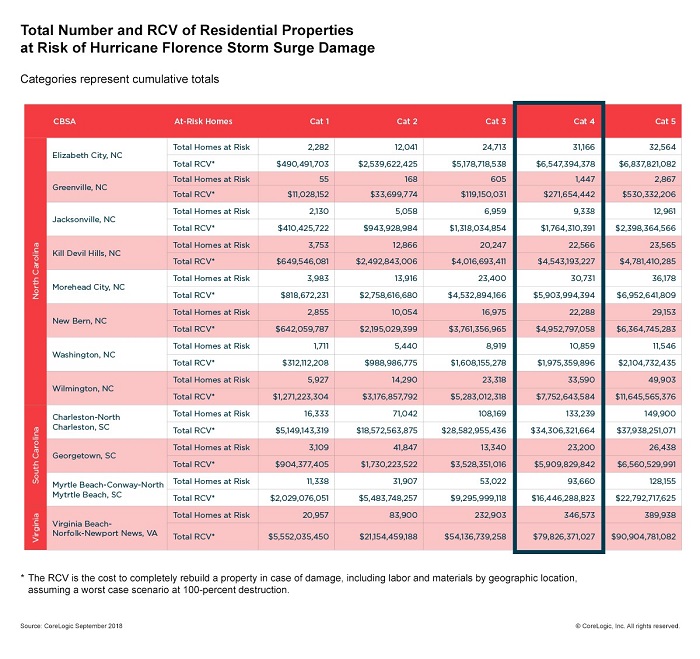 Hurricane-driven storm surge can cause significant property damage when high winds and low pressure cause water to amass inside the storm, releasing a powerful rush over land when the hurricane moves onshore, CoreLogic explained.

It should be noted that CoreLogic and RMS’s figures model a worst case scenario and that actual damage may differ significantly depending on how Hurricane Florence’s path and intensity develop over the next few days.

“There can be the potential for significant uncertainty in a forecast track for a storm like Florence that is so far offshore,” Tom Sabbatelli, an event manager at RMS, said in an interview with Bloomberg. “Every event has its unique characteristics so we’re using that as a broad-brush first pass right now,” he said of the numbers.

As pressures mount, the Managing General Agent (MGA) sector must lead the market for process enhancement and generate clear value...