Hurricane Ian made landfall on Wednesday as a major Category 4 storm with maximum sustained winds of around 155 mph near the Cayo Costa area, bringing widespread flooding, property damage, and power outages.

The NHC warned of severe and life-threatening storm surge inundation of as much as 8 to 10 feet above ground level, with destructive waves ongoing along the southwest coast of Florida.

After battering the Florida coastline, leaving around two million people without electricity, hurricane Ian is now losing power as it tracks inland, and has been downgraded to a category 1 storm, with winds of 75 mph.

Hurricane-force winds, especially in gusts, will continue to spread across central Florida near the core of the storm early on Thursday.

According to the NHC, hurricane conditions are expected through the day, and widespread, life-threatening catastrophic flooding, with major to record river flooding, will persist across parts of central Florida.

The NHC notes that considerable flooding in northern Florida, southeastern Georgia and eastern South Carolina is expected on Thursday through the end of the week.

Images on social media and news sites around the world show just how high water levels are in some parts of the state, with authorities reportedly being inundated with water rescue calls. It’s also clear that properties and infrastructure have been severely damaged in some cases, although it will take time to learn exactly how widespread and severe the damage is.

With intense wind and flood impacts from hurricane Ian, alongside the potential for loss creep and business interruption, it’s likely going to be a challenge to estimate insurance and reinsurance industry losses.

Prior to the storm making landfall, loss estimates had ranged from $10 billion up to $40 billion, with broker BMS saying yesterday that there’s a good chance the loss is more than $20 billion.

But as ever with a major landfalling hurricane event, it’s going to be a complex loss to unravel in Florida alone, and with Ian threatening another landfall in the Southeast, according to some meteorologists, things could get very complicated.

State of emergencies have been issued in Georgia, Virginia, and the Carolinas as experts warn that the dangers from hurricane Ian are far from over.

See below for the latest forecast cone from the NHC, which shows the storm heading back out to sea before making a second landfall sometime on Friday evening. 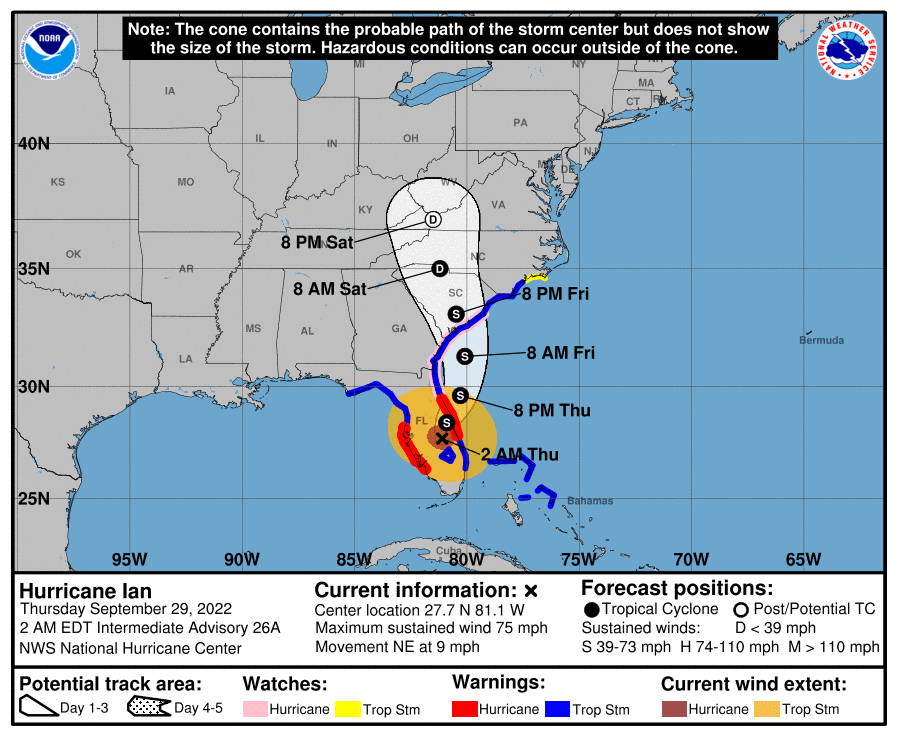 According to meteorologists, how long the centre of Ian is able to spin over the Atlantic will determine whether it is able to regain enough wind intensity to become another hurricane as it heads for the border of Georgia and South Carolina.