Data analytics and risk assessment firm Verisk has estimated that Hurricane Ian could drive a re/insurance industry loss of between $42 billion and $57 billion. 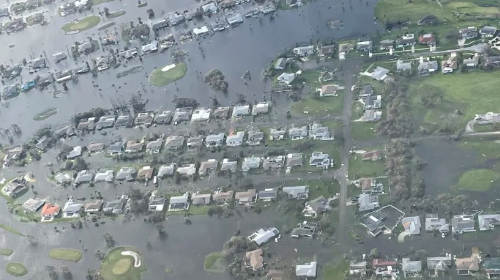 This estimate accounts for wind, storm surge and inland flood losses from Ian’s landfalls in both Florida and South Carolina, although analysts say the majority of insured losses will result from wind damage in Florida.

In total, wind damage across both states is expected to comprise between $38 billion and $51 billion of the total loss estimate, with storm surge accounting for $3 billion to $5.5 billion, and inland flood less than $1 billion.

However, it should be noted that Verisk’s estimate does not include losses to the National Flood Insurance Program and any potential impacts of litigation or social inflation, which, when factored in, could cause the total insured industry loss to exceed $60 billion, Verisk says.

Analysts also reported that only 1% of the total insurance and reinsurance industry loss is expected to stem from the impacts of Ian’s South Carolina landfall.

Verisk’s industry loss estimate is significantly higher than some of the initial estimates by other firms such as CoreLogic, which put the upper bound of losses at $47 billion, while rating agency Fitch was lower still at $40 billion and KBW somewhere in the “low $30 billion range.”

But it does line up with more recent estimates by KCC, which put insurance market losses from Ian at $63 billion, as well as the results of a recent industry poll, which suggests that most industry participants are expecting losses to exceed $50 billion.

According to Verisk’s analysis, wind damage in varying degrees was observed in all the areas impacted by Hurricane Ian’s windfield, but was more severe in and around the areas where Ian made landfall in southwest Florida. It ranged from significant loss of roof covers in residential homes to torn up roof membranes in commercial structures, and extensive damage has also been seen to elements of building components and cladding.

Storm surge also caused massive destruction to communities along the western coast of Florida where Ian made landfall, causing the collapse of several rows of beachfront residential homes, and, in some cases, dislodging homes from their foundations.

Included in the Verisk estimate are losses to onshore residential, commercial, and industrial properties and automobiles for their building, contents, and time element coverage, and the figures also reflect the impacts of inflation on labor and materials over the past two years, as well as the effects of demand surge, when large numbers of property owners look to rebuild at the same time.

Ian officially made landfall at Cayo Costa, Florida on September 28th as a Category 4 hurricane with maximum sustained winds of 150 mph, before slowly proceeding inland and following a northeasterly track that led the storm’s massive 30-mile-wide eye over Gasparilla Sound and Punta Gorda.

Owing to the storm’s slow motion, areas like Port Charlotte and Englewood remained in Ian’s eyewall for several hours, resulting in 18-20 inches of rainfall in addition to prolonged exposure to the powerful wind gusts located in Ian’s northwestern eyewall.

Ian managed to stay about 65 miles southwest of Tampa, which owing to Ian’s large wind field was still close enough to bring wind gusts into the upper-70s mph and 2-5 inches of rainfall.

On September 29th, Ian moved off the Atlantic coast near Cape Canaveral and then made a second landfall the following day near Georgetown, South Carolina as a mid-range Category 1 hurricane with maximum sustained winds of 85 mph.