Analysis by catastrophe risk modeller Karen Clark & Company (KCC) estimates that the insurance and reinsurance industry loss from Hurricane Ida will near $18 billion, the large majority of which is attributable to wind and storm surge losses in the U.S. 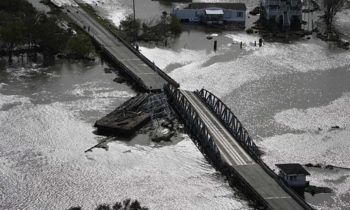 This industry loss estimate from KCC includes privately insured damage to residential, commercial, and industrial properties and automobiles, but does not include boats, offshore properties, or National Flood Insurance Program (NFIP) losses.

On August 27th, Hurricane Ida made its first landfall near La Columba, Cuba, with maximum sustained winds of 80mph.

Two days later, the storm made landfall near Port Fourchon, Louisiana, as a Category 4 hurricane with maximum sustained winds of 150mph.

KCC notes that impacts from Ida in Cuba and the Cayman Islands have been limited to non-structural damage, fallen trees, and power outages. The risk modeller expects insured losses in the Caribbean to total just $40 million of the close to $18 billion total.

The rest of the total comes from wind and storm surge losses in the U.S., as Ida’s strength at landfall ties it with the Last Island Hurricane in 1856 and Hurricane Laura in 2020 for the strongest maximum sustained winds at landfall in the state of Louisiana.

Early indications from modelling data suggested that Hurricane Ida would drive an insurance and reinsurance industry loss of between $15 billion to $25 billion. While KCC’s estimate is towards the lower end of this range, it does exclude any NFIP losses, damages to boats, and offshore properties.

It’s been reported that Ida could drive additional major losses in energy accounts, although the extent of these will depend on the ability of offshore oil rigs to withstand the impacts of the storm.

Analysts have said that while the event is expected to drive significant economic and re/insured losses, some of which will flow to the insurance-linked securities (ILS) space, it’s likely to be an earnings event rather than a capital event.

Furthermore, analysts also suggest that more of the industry loss could shift to reinsurers as the elevated catastrophe load in H1 2021 saw some primary carriers significantly erode their catastrophe budgets for the year.