Just before 1am local time, Hurricane Laura made landfall near Cameron, Louisiana, as an extremely dangerous Category 4 storm, packing sustained winds of 150 mph with the potential to impact more than 1 million homes. 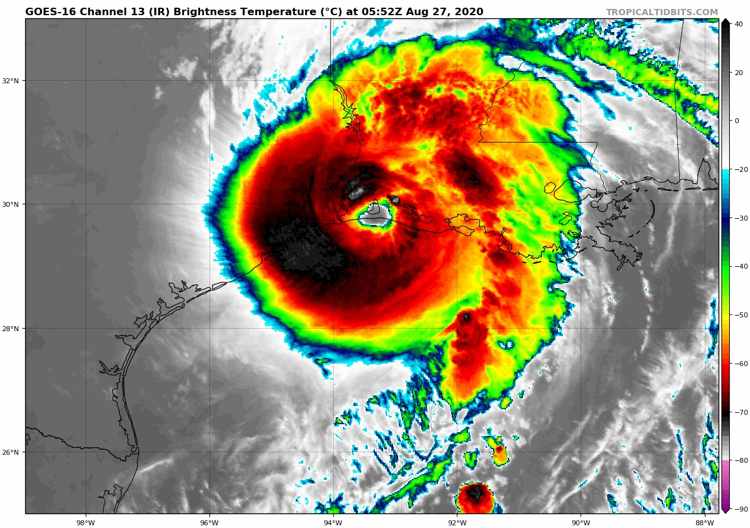 The central pressure of the storm continued to drop, reaching 938 mb at landfall, while hurricane force winds extended outwards up to 60 miles from the centre, with tropical storm force winds extending up to 205 miles.

Hurricane Laura really is a very large and dangerous storm, and it’s expected that the hurricane will cause significant damages in the landfall region, with potentially “unsurvivable” storm surge of 15 to 20 feet in certain areas anticipated to inundate parts of Louisiana and Texas, warns the NHC.

In what’s been tipped to be an above-average 2020 Atlantic Hurricane season, Laura became the 12th named storm, fourth hurricane and first major hurricane of the season.

Catastrophe risk modeller CoreLogic has warned that Laura has the potential to impact some 1.1 million homes with a combined reconstruction cost value (RCV) of $265 billion. The company notes that although the track of the storm has shifted slightly from Houston, storm surge is expected to “heavily impact the Lake Charles and Jennings metro areas.”

As it interacts with land, weakening is now expected and as at 8:00 BST, Thursday August 27th, the NHC said that the storm had maximum sustained winds of 140 mph, so still at major Cat 4 hurricane status. The central pressure stood at 941 mb and Laura was tracking north at a speed of 15 mph.

An update from the NHC shows that, as at 10:00 BST today, Laura weakened to a Cat 3 storm with maximum sustained winds of 120 mph, a central pressure of 948 mb as it continued to track north at a speed of 15 mph.

The NHC’s latest update, as at 13:00 BST today, shows that Hurricane Laura has maximum sustained winds of 100 mph, making it a Cat 2 storm, with a central pressure of 970 mb, still tracking north at a speed of 15 mph.

For insurers and reinsurers, the landfall location of Laura suggests a lower overall loss as this area is not as built-up or as heavily populated as the Galveston area, which is further to the west.

Of course, it’s far too early for any accurate industry loss estimates related to the storm, but sources told our sister site Artemis yesterday that a range of between $10 billion to $20 billion is being reported, and which seems possible in light of the size and power of the storm.

Catastrophe risk modeller RMS reported last night that Hurricane Laura analogue storms from the past suggest an insurance and reinsurance industry loss range of between $0.8 billion and $5.9 billion.

For the people of Louisiana and the surrounding area, it’s going to be a challenging morning as the storm passes through, with rainfall totals expected to be 8 to 12 inches, with isolated maximum amounts of as much as 18 inches possible.