Hurricane Maria’s devastating impacts in the Caribbean are estimated to have cost the insurance and reinsurance industry between $40 billion and $85 billion, according to AIR Worldwide. 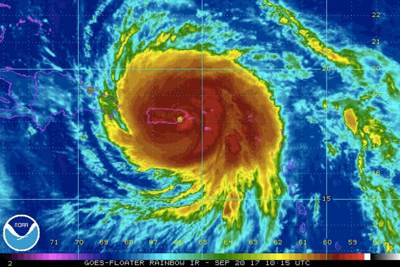 Risk modelling firm AIR Worldwide said that it estimates that the island of Puerto Rico will account for as much as 85% of the total losses, reflecting the extreme levels of damage reported there.

Hurricane Maria, as the second major hurricane to sweep through the Caribbean in as many weeks, has compounded the damage done by Hurricane Irma, wreaking additional destruction on some islands hit by Irma, and devastating a few locations that had escaped the worst of the previous hurricane.

Dominica was first to be hit on Tuesday, September 19th with hurricane Maria a deadly Category 5 storm. The island was devastated, with widespread flooding also experienced in adjacent Guadeloupe. Maria then weakened briefly to a Category 4 hurricane, but intensified to Category 5 as it crossed the warm waters of the northeastern Caribbean Sea. Hurricane Maria’s eyewall then came close to the western edge of St. Croix in the Virgin Islands on Tuesday night, resulting in storm surge and large wave impacts along the southern shores.

Hurricane Maria was then downgraded slightly to Category 4 before making landfall on Puerto Rico near the town of Yabucoa on Wednesday, September 20th with maximum sustained winds of 155 mph.

AIR said that hurricane Maria resulted in a storm surge of 6 to 9 feet in some areas and inundated the country with 12 to 18 inches of rain, with higher amounts in some locations. Marian then passed close offshore of the northeast coast of Hispaniola delivering heavy rain, Category 3 winds, and storm surge to the northern Dominican Republic.

AIR Worldwide explains some of the impacts to the Caribbean islands hit by hurricane Maria:

Islands in the Caribbean devastated by the storm, and by Hurricane Irma two weeks earlier are in the early stages of what will inevitably be a very lengthy recovery period. It is abundantly clear that this has been a major catastrophe for the region.

More than 3 million people in Puerto Rico, for example, remain without electricity, drinking water, and gas; other essentials are in short supply. Communications are challenging, with 95% of cell phone towers reportedly toppled. Many towns have been cut off by landslides, floods, or torrents of muddy water; widespread damage is reported.

As heavy precipitation continued, the dam on the Guajataca River was significantly compromised and was deemed in danger of an imminent break Friday afternoon. Some 70,000 people downstream were advised to evacuate immediately. The dam is an earthen structure built in 1929 to provide drinking water, irrigation, and power generation. It has not failed, but remains in danger of doing so.

Economic loss estimates had suggested Maria may cause somewhere up to $50 billion of damages, but this insured loss estimate would suggest that the economic cost could perhaps be as much as double that amount, or greater.

Coming so soon after hurricanes Harvey and Irma, Maria’s loss could take the industry toll from these three storms well over $100 billion, which should be enough to put a stop to softening in some regions, although it is unlikely to be enough to cause a market-wide turn in reinsurance pricing.

The estimates also include “demand surge,” the increase in the cost of labor and materials that is often observed in the aftermath of major catastrophes, which it says could be exacerbated due to the close proximity in time of the impacts of hurricanes Harvey, Irma, and Maria. Demand surge can amplify insured losses considerably and could be a significant factor here.

AIR also noted that the estimate of insurance industry losses does not include losses to infrastructure; losses from hazardous waste cleanup, vandalism, or civil commotion whether directly or indirectly caused by the event; losses to offshore properties, pleasure boats, and marine craft; losses resulting from the compromise of existing defenses (e.g., levees); and uninsured property losses.