Impact Forecasting, Aon Benfield’s catastrophe risk modeller, has collated the damage of Hurricanes Harvey, Irma, and Maria from the 2017 Atlantic Hurricane Season, and estimated that they caused a total of US $220 billion in economic damage, $80 billion of which was covered by public and private re/insurance entities. 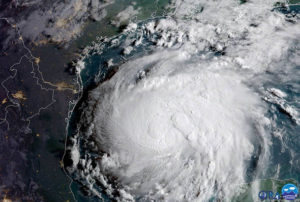 Hurricane Harvey was the first and most costly of the trio to make landfall, causing around $100 billion of wind and flood damage across Texas and Louisiana, 30 percent of which was covered by re/insurers.

Harvey became one of the costliest natural disasters ever recorded in the U.S, second only to Hurricane Katrina, and caused extensive damage to residential and commercial properties, automobiles, infrastructure, agriculture, offshore & onshore energy, and marine interests.

In September, shortly after Harvey dissipated, Irma grew into one of the most significant storms ever recorded in the Atlantic Ocean basin and had a devastating financial and humanitarian impact on the Caribbean and U.S, resulting in around $55 billion of economic losses.

Re/insurers covered approximately half the losses incurred by Irma, was became the first major hurricane (Category 3+) to strike Florida since Hurricane Wilma in October 2005.

Shortly afterwards, the Caribbean was again ravaged by Hurricane Maria, which became one of the costliest natural catastrophes ever recorded globally and caused widespread damage and humanitarian impact, crippling the infrastructure of Puerto Rico.

Maria significantly contributed to the high economic toll of the 2017 Atlantic Hurricane Season, causing estimated total losses of $65 billion, around $27 billion of which was covered by public and private re/insurers.