Analysts at Aon believe that flood damage in the Mid-Atlantic and Northeast regions caused by the tail-end of Hurricane Ida will result in an additional double-digit billion dollar economic loss. 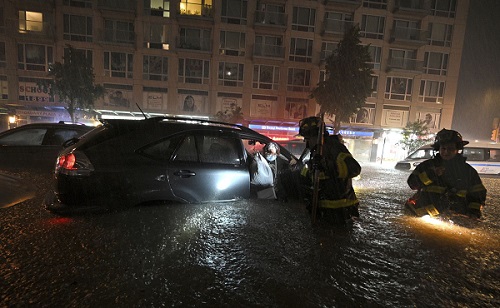 Ida made landfall in Louisiana on Sunday as a Category 4 hurricane, battering the state with sustained wind speeds of up to 150mph.

The landfall in Louisiana alone was expected to drive insured losses of $15 billion to $25 billion, in addition to economic losses in the tens of billions, but Aon now says that the flooding element in other states could add double digits billions to the overall cost.

The rainfall and subsequent flooding in the Northeast has so far claimed the lives of at least 14 people and has resulted in the governors of both states declaring a state of emergency.

The arrival of storm Ida saw the National Weather Service issue a flash flood emergency in New York City for the first time as subway lines became submerged, vehicles were swept away, and flights were grounded.

The National Weather Service said that the storm produced “extreme rain rates” of up to 3 inches per hour along the Philadelphia to New York corridor.

Aon notes that the enormous scale of damage along Ida’s path will result in a lengthy period of damage assessment and quantifying the direct fiscal cost to residential and commercial property, vehicles, the energy sector, infrastructure, agriculture, and direct net-loss business interruption.

The impact to the insurance industry is also expected to be high, as wind-related residential, commercial and auto damage across Louisiana and parts of Mississippi and Alabama are anticipated to primarily be covered by standard insurance policies. The same is true with the severe convective storm damage in the Northeast, including the series of tornadoes which struck New Jersey and Pennsylvania.

However, the broker added that a sizeable portion of the eventual economic damage cost is not likely to be covered by insurance, including most coastal and inland flood damage, such as damage to infrastructure or properties without an active National Flood Insurance Program (NFIP) policy.

Coastal areas in New York, New Jersey, and Connecticut have a relatively high percentage of NFIP take-up, which could lead to elevated program claims payouts in the Northeast.

Analysts have previously said that losses from Hurricane Ida could shift more to reinsurance as the heavy catastrophe load in the first half of 2021 saw primary insurers erode a significant amount of their catastrophe budgets.

Following the landfall in Louisiana, rating agencies classified the event as “manageable” and more of an earnings event for re/insurers, but with further catastrophic flooding now having occurred in other parts of the US it remains to be seen how severe the impact of Ida will be for individual firms.

Genworth secures $372mn of reinsurance via Triangle Re