The Government of Indonesia has signed an umbrella contract with a consortium of 56 re/insurers to protect state assets against natural disasters and other major risks. 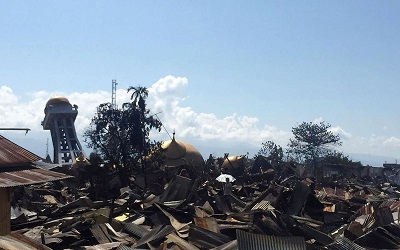 Aftermath of the Sulawesi earthquake and tsunami in Palu, Indonesia on September 30, 2018. Source: AP Photo/Chandra

The agreement will cover ministry and institutional buildings in Indonesia against structural damage until 2023.

Isa stated that the buildings are insured against a range of natural disasters, including earthquakes, floods, tsunamis and fires, as well as riots, sabotage, terrorism, and plane crashes.

Indonesia is in one of the world’s most natural disaster-prone areas and is at risk to multiple hazards, including flooding, earthquakes, landslides, tsunami, volcano, and cyclone.

The move follows a particularly devastating year for the country in 2018, when a series of earthquakes and tsunamis left thousands dead and infrastructure in ruins.

The September quake and tsunami in Sulawesi alone left more than 4,300 dead and damaged 70,000 homes, while an earlier earthquake in Lombok killed more than 500 and caused widespread damage.

After the Ministry of Finance is fully insured, assets controlled by 10 further ministries will be involved in 2020, Isa said.

Among these are the Corruption Eradication Commission (KPK), the National Agency, Counter Terrorism (BNPT), to the Agency for the Assessment and Application of Technology (BPPT).

According to Reuters, insurance companies in the consortium include Asuransi Tugu Pratama Indonesia, Asuransi Astra Buana, which is a unit of Astra International, and Asuransi Sinar Mas, part of conglomerate Sinar Mas Group, as well as state-owned Asuransi Jasa Indonesia and Asuransi Kredit Indonesia.