The recent seizure of a British-flagged oil tanker by Iran in the Persian Gulf could have a knock-on effect on global fuel prices and insurance premiums, according to analysts at global law firm DWF. 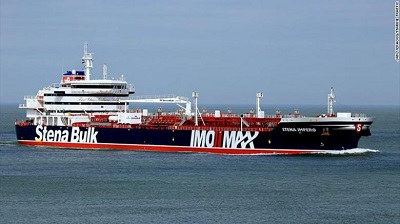 The Stena Impero was captured by the Iranian Revolutionary Guard on Friday as it passed through a key shipping route in the Straight of Hormuz, after Tehran claimed that the vessel was “violating international maritime rules.

However, the UK has accused Iran of retaliation following the seizure of the Iranian Grace 1 supertanker by British authorities near Gibraltar earlier this month.

Jonathan Moss, Head of Transport and Marine at DWF, said that rising tensions as a result of these incidents are likely to give rise to more uncertainty and cause insurers to raise premiums.

He compared the situation to the invasion of Iraq in 2003, which led to significantly higher premium rates for Hull & Machinery and War Risk cover for tankers in the Persian Gulf due to political instability.

“Global marine insurers are already closely monitor the current situation and employ complex risk models,” Moss explained. “Given the hostility escalating, underwriters will also be closely scrutinising voyages on a case-by-case basis with premium increases covering vessels in the region a near certainty.”

He continued: “Ultimately, this uncertainty in the Gulf region is likely to lead insurers to raise premiums, renegotiate terms of cover and introduce riders to Marine and Energy contracts of insurance and reinsurance, in the face of a cocktail of instability in the region.”

Royal Marines helped to seize the Iranian tanker off Gibraltar becuase they believed that it was carrying oil to Syria in breach of EU sanctions.

UK authorities said it was detained legally, but Iran protested that the siezure constituted “piracy” and threatened to capture a British vessel in return.

Iran’s Foreign Minister also accused the UK of being an “accessory” to the “economic terrorism of the US,” and insisted that Iran’s actions had been taken to ensure the security of the Gulf and “uphold international maritime rules.”

The Iranian ambassador to London further warned the UK against escalating tensions at what is a “sensitive time in the region.”

Relations between Iran and the UK and US have been strained recently after the US tightened sanctions on Iran for withdrawing from a 2015 nuclear deal. The US also blamed Iran for attacks on tankers earlier this year, which Iran has denied.