Economic damage from the recent monsoonal flooding in Japan is expected to reach well into the hundreds of millions USD or higher, according to re/insurance broker Aon. 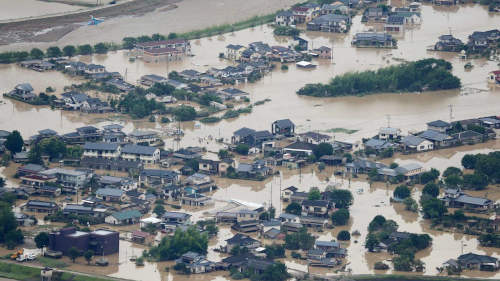 The latest catastrophe report by Aon’s Impact Forecasting team also anticipates thousands of insurance claims will result from the flooding, although the General Insurance Association of Japan (GIAJ) had yet to release preliminary claims data.

Heavy flooding caused Kuma and Hida Rivers along with other smaller rivers to break their banks at 60 locations, leading to inundation damage to no fewer than 9,500 houses, businesses, bridges, and roads.

So far, there is an estimated 60 fatalities and more than 400,000 people have either been relocated or instructed to take refuge due to the heavy flooding.

And with more rainfall forecast in the coming days and weeks, further damage and losses are likely, as well as a more risk to life.

Many emergencies were reported from the severely affected area in Kumamoto and Kagoshima prefectures due to flood waters which reached up to roof level at several houses.

A significant proportion of residents were left without electricity and drinking water, while telecommunications and internet services were also affected.

At least 11 bridges were destroyed in Kyushu islands and large segments of roads were damaged to various degrees, according to infrastructure ministry, Japan.

According to Aon, around 60 rivers are currently swollen above the flood warning level at several locations, and 179 mudslide events had occurred in 23 prefectures.

Lloyd’s to focus on US reinsurance and E&S, drops admitted licenses

Insurance and reinsurance marketplace Lloyd’s of London has announced that it plans to strengthen its focus on the US reinsurance...