Analysts at RBC Capital Markets (RBC) believe that under the current return on equity of the European reinsurance industry a loss event similar to 2005’s Hurricane Katrina would “wipe out” 11 months of industry earnings and, it could be that a smaller loss than previously thought is needed to turn pricing in the sector.

With the low interest rate environment dampening investment returns for reinsurers and consistent, albeit recently reduced rate reductions – a hallmark of the softening landscape – hindering companies’ underwriting results, returns on equity are depressed across the sector.

As a result of reduced return on equity for European reinsurers, analysts at RBC feel that the impact from a large loss event today is greater than it was a decade ago.

“Under the current return on equity, a Katrina type loss would wipe out 11 months of industry earnings, compared to 8 months’ worth of earnings ten years ago,” says RBC, and highlighted by the below chart. 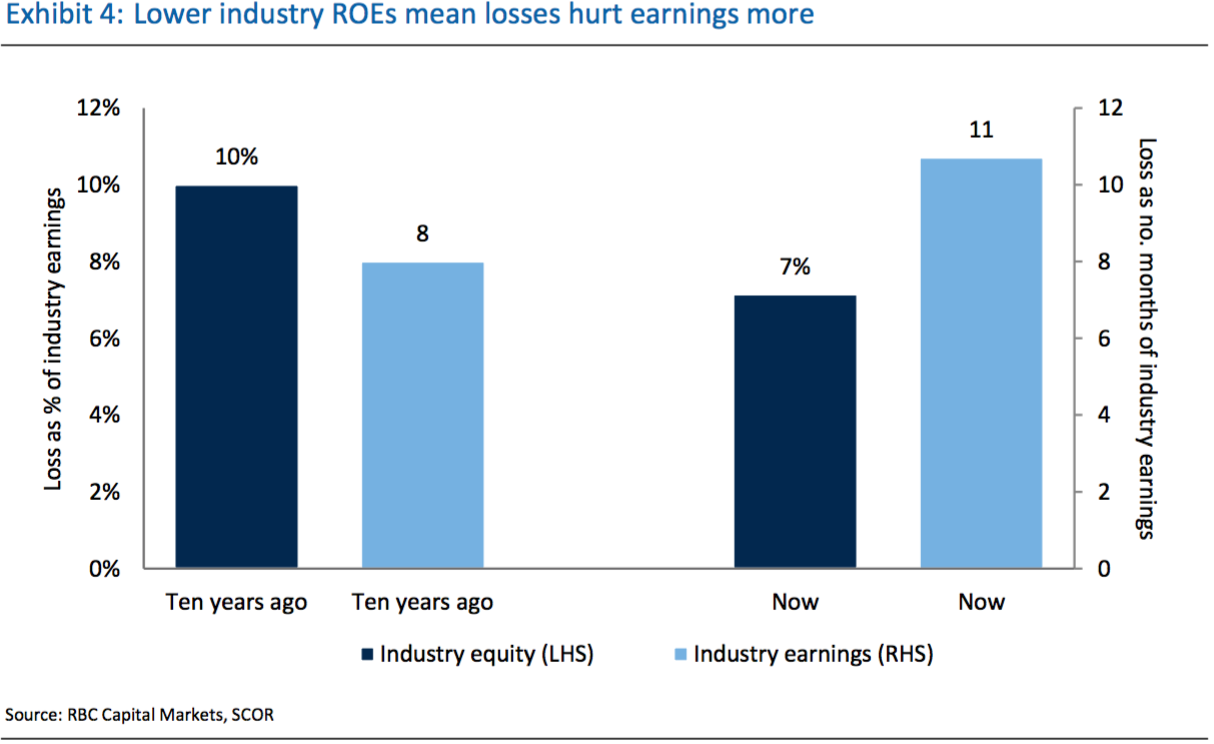 As the chart shows, while a Katrina type loss today would reduce the sector’s equity at a lower rate than a decade ago, the fact the industry’s return on equity (ROE), on a normalised basis, is currently lower than it was ten years ago, means the earnings impact is substantially higher.

“Hurricane Katrina events by their very nature do not happen that often. However, what this example highlights is that perhaps the loss needed to turn pricing is not as large as previously thought,” says RBC, in a recent European Reinsurance market report.

As the softening market cycle has persisted and intensified much discussion has taken place around what might be needed to drive a turn in the current market cycle, and ultimately turn rate movements positive.

The abundance of capital in the reinsurance industry from both traditional and alternative sources, and the reported large volumes of capacity sat outside the market waiting to enter, is expected to flatten future market cycles and dampen any post-event price surge.

However, despite higher industry equity, RBC says “we could be closer to an event that makes prices react positively than many think.”

Only time will tell exactly what stimulates a turn in the reinsurance pricing environment, but current ROE metrics of European players suggests it could be a smaller loss event than previously thought.