Catastrophe risk modeller Karen Clark & Company (KCC) has estimated that the insured loss to onshore properties from Hurricane Elsa will be around $290 million. 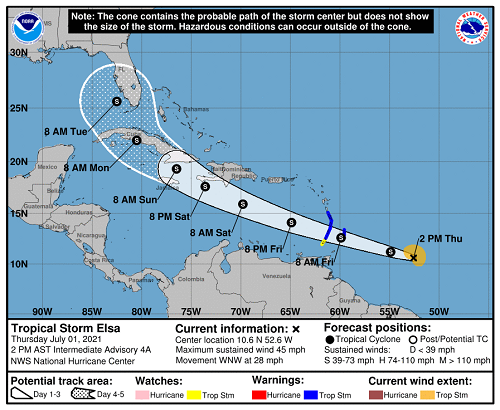 Elsa was the first hurricane of the 2021 Atlantic season, but waivered in intensity and ultimately made landfall three times as a tropical storm, first in Cuba on July 5th, then two days later in Taylor County, Florida, and again on July 9th in East Hampton, New York.

At its height, Elsa had sustained wind speeds of 75mph, but these weakened to 65mph by its first US landfall, and to 50mph by the time it affected New York.

According to KCC, Elsa brought hurricane force winds to portions of the Lesser Antilles, including Barbados, St. Lucia, and St. Vincent.

This resulted in downed trees, power outages, and damage to roof coverings and other exterior elements.

In Barbados, more than 1,100 instances of structural damage were reported, including 62 collapsed homes, and in St. Lucia, strong winds removed the roof covering and damaged the siding of a secondary school.

Tropical storm force winds caused some damage in portions of Hispaniola and Jamaica, while only minimal structural damage from high winds occurred in Cuba.

In Florida, the storm hit a fairly lightly populated area, with most of the damages stemming from downed trees and power lines.

However, some minor damage did occur in Levy County, Florida, including the removal of a hotel’s roof and downed powerlines, and some isolated structural damage also occurred as a result of an EF-1 tornado caused by Elsa in the San Jose neighborhood of Jacksonville, Florida.

After this, tropical storm force winds caused scattered damage across the coastal southeastern US, including downed trees and powerlines in Georgia and the Carolinas, while tropical-cyclone-induced tornados caused more isolated instances of damage.