Analysis shows that some of the nationwide homeowners insurance giants in the U.S. have some of the highest level of catastrophe exposure to hurricane Ian, which is currently forecast to reach west-central Florida as a major Category 3 storm Wednesday evening local time.

After making landfall in Cuba’s Pinar del Río province on Tuesday morning as a Category 3 storm with winds of 125 mph, models suggest hurricane Ian will strengthen further, and reach the Tampa Bay area of Florida’s coastline as a major Cat 3 hurricane.

While the exact landfall location, as well as the size and strength of hurricane Ian as it moves over Gulf of Mexico waters is uncertain, the threat of significant storm surge has emerged as a real concern for insurance and reinsurance market participants.

The NHC has warned that significant storm surge poses the highest risk across Fort Myers to Tampa. The Tampa Bay area is extremely vulnerable to storm surge given low-lying properties and a coastline that accentuates surges.

Further, the region is home to some very high-value properties, and while homeowners’ policies in the state generally exclude flood, personal auto and commercial property policies do cover the flood peril.

As shown by the image below from research scientist Tomer Burg, it now looks as though hurricane Ian will make landfall just south of Tampa, close to Sarasota, with winds of 125 mph when the storm is just offshore or making landfall. It’s also projected that hurricane Ian will slow considerably, which has the potential to worsen the storm surge effects and flooding. 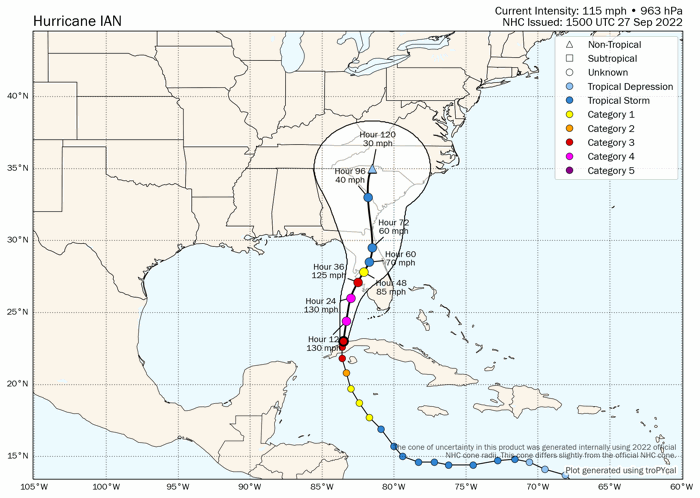 To provide some insight into the potential exposure for primary insurers operating in Florida as hurricane Ian approaches, analysts at KBW have released data on the cat-exposed market share for carriers, which shows that some of the nationwide homeowners giants are among the most exposed to the event.

Ratings agency AM Best has also provided a list of market share for homeowners insurers in Florida based on 2021 direct premiums written (DPW). This has Universal Insurance at the top of the list with a 10.48% market share with DPW in the state of more than $1.3 billion.

Interestingly, Citizens Property Insurance Corporation, Florida’s residual market insurer, is second on the list with a 10.16% market share with DPW of $1.26 billion. The data shows that Citizens is holding a lot of exposure and this has been growing fast in recent times on the back of a rising policy count driven by issues in the Florida property market and insolvencies.

It’s also worth noting that Citizens has less reinsurance in place after it struggled to fill its towers for the 2022 wind season in challenging market conditions for buyers of protection, notably in Florida.

As hurricane Ian continues its track towards Florida, it will become clearer in the coming hours where it will come ashore, and at what size and strength.