Marsh McLennan remains the world’s largest re/insurance broker, in terms of total revenues, which reached a huge $19.8 billion for the firm in 2021, according to our directory of the Top 20 Global Insurance & Reinsurance Brokers, based on research data from A.M. Best. 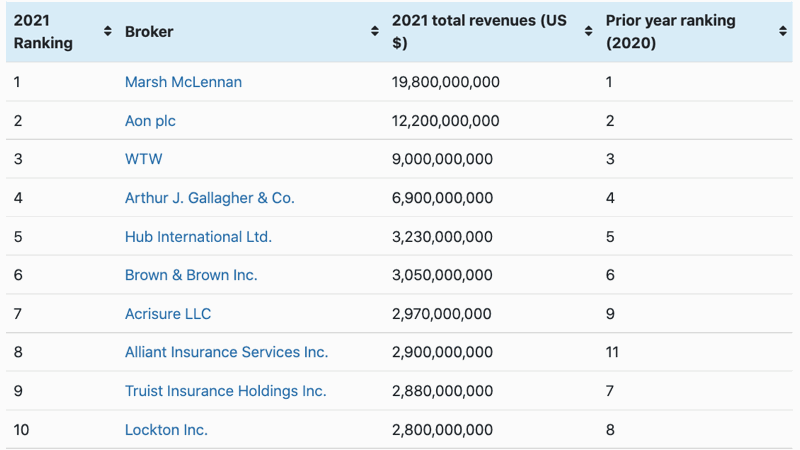 Over the same period, rival broker Aon, which remains in second place, saw its revenue increase by $1.13 billion to $12.2 billion. While still positive, smaller growth at Aon means that Marsh McLennan has both maintained and extended its lead at the top, with a gap of $7.6 billion between the company and its closest rival.

Of course, the top three could have looked a bit different had Aon’s proposed merger with WTW been successful. However, the deal was terminated last July after the buyer reached an impasse with the US Department of Justice. In the aftermath, WTW sold most of its reinsurance business to Gallagher, which resulted in a much larger Gallagher Re.

Arthur J. Gallagher remains one place behind WTW in fourth, with revenue growth of $900 million through 2021 taking the year-end total to $6.9 billion for the firm.

Hub International in fifth position and Brown & Brown in sixth place is also unchanged for 2021, with an increase in revenue to $3.23 billion and $3.05 billion, respectively.

But while the top six is the same as the previous year, with growth at all of those brokers apart from WTW, there’s been some changes further down.

For 2021, the top 10 is completed by Truist Insurance Holdings in ninth and Lockton in 10th place. While both firms moved down the list two places they did achieve year-on-year revenue growth. Truist reported growth of $440 million to $2.88 billion, and Lockton’s revenue increased by $700 million to end 2021 at $2.8 billion.

In the bottom half of the table, revenue growth was also evident in 2021, with more brokers seeing year-end total revenue breach the $1 billion threshold than in the previous year.

In 19th place AmeriTrust Group Inc. returns after a year hiatus with revenue of $667.6 million. Fanhua Inc. completes the list, just as it did in 2020, with total revenues of $513.3 million.