New data from reinsurer Munich Re estimates that natural catastrophes caused global economic losses of $150 billion in 2019, of which $52 billion was covered by re/insurance. 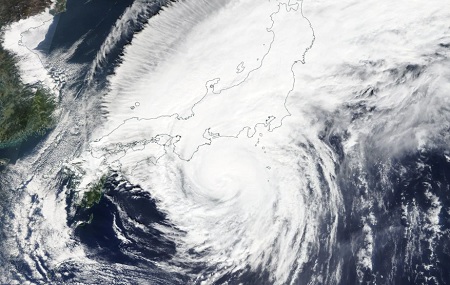 Typhoon Hagibis in Japan was the costliest natural catastrophe event in 2019, driving insured losses of $9 billion, according to Munich Re.

Analysts noted that the insured portion of overall losses – slightly above 35% – was broadly in line with the average over the past ten years.

The figures also appear to support earlier estimates from Swiss Re, which put economic losses at $140 billion in 2019, and re/insured losses at $56 billion.

However, it is worth noting that Swiss Re’s numbers factored in the impact of both natural and man-made disasters, while Munich Re only accounts for natural catastrophes.

According to Munich Re, losses in 2019 were driven by a total of 820 catastrophe events, which resulted in 9,000 deaths worldwide.

Of these events, Typhoons Hagibis and Faxai in Japan were the two costliest catastrophes in terms of both economic and insured losses.

While the overall number of storms in the northwest Pacific was close to the long-term average last year, analysts believe that the increased severity and loss potential of typhoons over the last two years could be linked to climate change.

“The severe cyclones in 2019 have highlighted the importance of knowledge about changes in risk,” said Torsten Jeworrek, Member of the Board of Management at Munich Re.

“Natural climate variations influence weather catastrophes from year to year,” he explained. “Longer-term climate change effects can already be felt and seen. Buildings and infrastructure must be made more resistant in order to reverse the increasing trend in losses. This will enable insurance to be more effective and support the remaining financial losses.”

Ernst Rauch, Chief Climate and Geoscientist at Munich Re, also commented: “The typhoon season shows that we must consider short-term natural climate variations as well as long-term trends due to climate change.”

“In particular, cyclones are becoming more frequently associated with extreme precipitation, as with Hagibis in Japan in 2019 and Hurricane Harvey in 2017 in the US. Recognising these changes can form the basis for further preventive measures to reduce losses.”

Dorian narrowly avoided the southeast coast of the US, meaning overall losses in the US during the 2019 hurricane season were relatively low at $3 billion, of which $2 billion were insured.

Staying with the US, wildfires in California caused economic losses of $1.1 billion and insured losses of $0.8 billion last year. These figures were lower than recent years but still continues the sharply rising long-term trend of wildfire losses, Munich Re noted.

In Europe, a combination of heatwaves and severe hailstorms were the main drivers of loss, with summer storms causing total losses of $2.5 billion and insured losses of $0.9 billion.

“Although hailstorms are localised, they can cause extreme damage and can even be life-threatening,” said Rauch.

“Recent scientific studies have shown that we can expect hailstorms to increase in many regions as a consequence of climate change,” he added. “It is also clear in this case: Measures such as better early-warning systems and more resistant building materials are important in order to mitigate against long-term increases in losses.”

The UK P&I Club, a provider of protection and indemnity (P&I) insurance and other services to the international shipping community,...