Munich Re has recovered the No. 1 position from Swiss Re in A.M. Best’s annual ranking of the Top 50 Global Reinsurance Groups, which also saw Warren Buffett’s Berkshire Hathaway climb two places to No. 3, pushing Hannover Rück SE and SCOR SE to the four and five spots respectively. 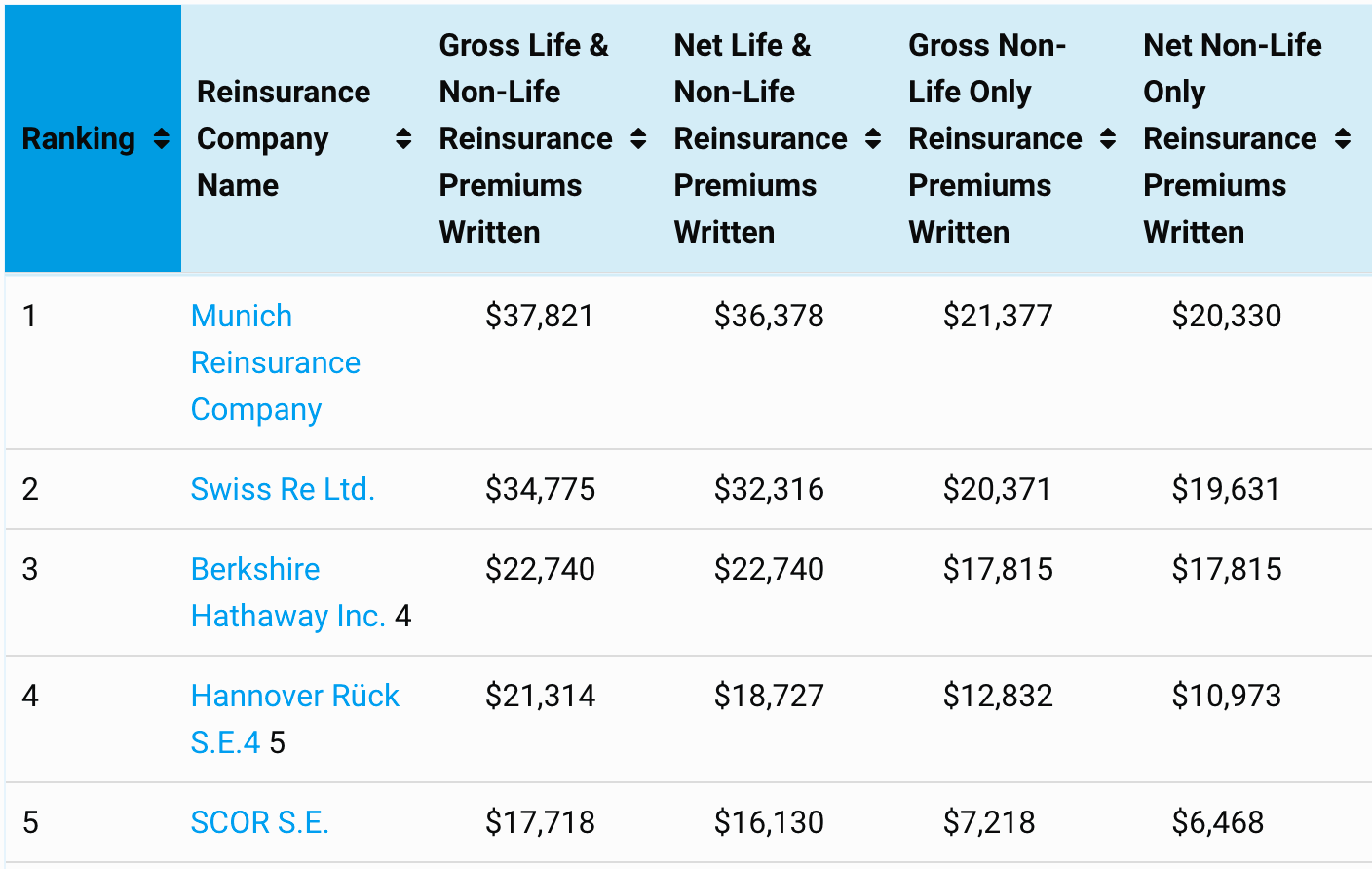 The Top 50 ranking of global reinsurance groups, which measures companies based on reinsurance gross premiums written (GPW), has seen Munich Re hold the top spot every year since 2010, with the exception of 2017 when it was overtaken by Swiss Re.

A.M. Best said that Munich Re’s return to the No. 1 spot was partly due to true growth in GPW, but added that the company also benefited from some unique circumstances in 2017, such as stronger than predicted economic growth in Europe and a weakened British pound, which contributed to an appreciation of the euro against the US dollar.

Together, Munich Re and Swiss Re account for nearly 30% of all the GPW in this year’s rankings, and remain the reinsurance market’s “unrivalled frontrunners,” A.M. Best said.

The rating agency also noted that Berkshire Hathaway’s jump in the rankings was driven primarily by the nearly $10 billion reinsurance agreement between its National Indemnity Co. and American International Group Inc., which was not accounted for until the first quarter of 2017, despite being finalised in January 2016.

The bottom half of the Top 10 positions remained unchanged from the previous year, and A.M. observed that the Top 10 reinsurance groups continue to make up roughly 70% of the total GPW in the Top 50 ranking.

“The amount of gross premiums written by the Top 10 in A.M. Best’s ranking reinforces the sentiment that the industry’s largest reinsurers continue house disproportionately sizable amounts of risk, despite cedants’ efforts to diversify their reinsurance panels and spread out their counterparty risk,” said Robert DeRose, Senior Director at A.M. Best.

The majority of reinsurers in the rankings also grew their books in both life and non-life between 2016 and 2017, according to A.M. Best, despite the ongoing soft market conditions in non-life, with overall GPW increasing by $36.1 billion, up from the $7.4 billion increase reported in 2016.

Additionally, many reinsurers continued to increase their expenses as companies sought to overcome pricing challenges with new investments in technology and by shifting their business into new lines.

Merger and acquisitions (M&A) activity also continued to influence the rankings, and accounted for the most dramatic change in position, with Sompo Holdings jumping from No. 46 to No. 22 as the consolidation of Endurance Specialty Holdings (now Sompo International Holdings) boosted the company’s life and non-life GPW by 265%.

In contrast, QBE Insurance Group and W.R. Berkley Corporation experienced the most notable downward movements, by 14 and 7 positions respectively.

You can analyse the full list of the Top 50 Global Reinsurance Groups here on Reinsurance News.

Specialist re/insurance broker, THB, has appointed Matthew Gould as Senior Broker for its aviation team, effective immediately. He will report...