Notably, this figure is almost three times higher than the AU $670 million (US $473 million) loss estimate put out by PERILS in March.

However, this earlier estimate only included losses for property lines, whereas the latest figure also accounts for motor losses, which made up AU $849 million of the total. Property losses also increased 44% between estimates, and account for AU $962 million of the new figure.

Due to disruption caused by the COVID-19 pandemic, PERILS did not carry out a second round of data collection prior to issuing its report on 21 April and so the estimate was unchanged.

This third report comes six months on from the January 19th to 21st hail event and provides a breakdown of property and motor losses by postcode, and further divides data by residential and commercial lines and loss amounts split into buildings, contents and business interruption losses.

It is complemented with information on damage degrees and hail intensities based on radar measurements by the Australian Bureau of Meteorology. 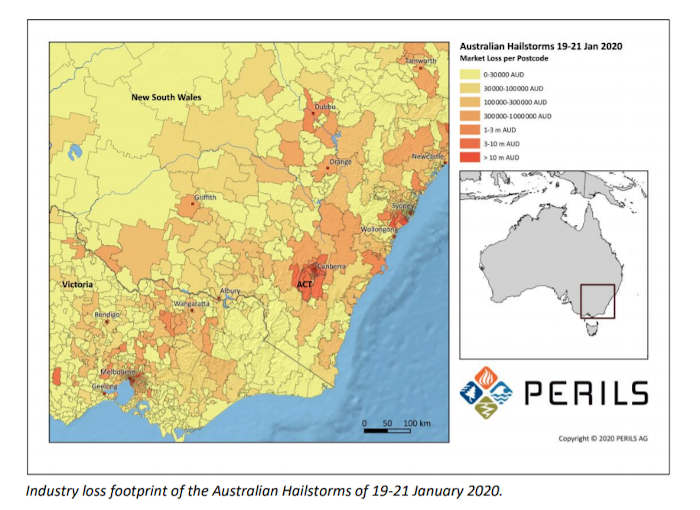 PERILS noted that this hail event was unusual in that it struck three states – Victoria, New South Wales and Queensland – and the Australian Capital Territory all within a three-day period. The largest impact was experienced in Canberra which suffered from hailstones up to 6cm in size.

Insurance losses during the three days were most severe in the Australian Capital Territory, accounting for 55% of the industry loss, followed by Victoria (25%), New South Wales (16%), and Queensland (4%).

“This release is of particular market relevance as it is the first time hail motor losses, split into private and commercial LOBs, are included in a postcode-level loss footprint by PERILS,” said Darryl Pidcock, Head of PERILS Asia-Pacific.

“This follows the Australian insurance industry’s support for the inclusion of motor, a measure which will further enhance its understanding of underlying risks and enabling improvements in modelling,” he added.

“This is only possible due to that support from our insurance partners and we are grateful to them for providing their data.”

In line with PERILS’ reporting schedule, a final updated estimate of the industry loss from the January hailstorms will be made available on 21 January 2021, one year after the event’s end date.