Re/insurance to cover less than half of Dorian’s $1.2bn US impact: Aon

Public and private re/insurance is expected to cover less than half of the total $1.2 billion economic impact of Hurricane Dorian in the US, according to Aon’s September Global Catastrophe Recap report. 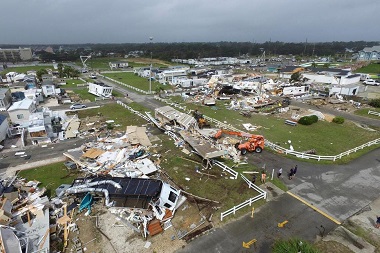 The month was characterised by a number of large industry losses, but Aon’s estimates also show that industry costs remained relatively low in many instances compared to overall economic impacts.

For example, the broker estimated that insured losses resulting from Typhoon Faxai in Japan will be at least $5 billion, at the low end of the $5-9 billion range forecast by catastrophe modeller RMS.

Additionally, Aon expects re/insurers to cover only a fraction of the $2 billion economic damage caused by Storm Imelda in the US, as most of the damage was driven by flooding.

In India, late monsoon rains have upped the season’s economic costs to nearly $10 billion, of which very little is likely to be covered by re/insurance.

“September is typically one of the most active from a meteorological perspective as it represents the historical peak of tropical cyclone activity in the Northern Hemisphere,” said Steve Bowen, Director and Meteorologist within Aon’s Impact Forecasting team.

“Unsurprisingly, this also translates into being one of the costlier months for the insurance industry,” he continued. “The events of 2019 will mark, thus far, the most expensive month for disasters following major cyclone events including Dorian (Bahamas & the U.S.) and Faxai (Japan).”

“While the year overall remains quieter from a loss perspective than 2017 and 2018, it is still imperative to remain cognizant of the weather risks that exist in the fourth quarter.”

Hurricane Dorian ultimately made three separate landfalls in the Bahamas, the US, and Canada, and tied as the strongest landfalling hurricane on record in the Atlantic Ocean after hitting the Bahamas with wind speeds of 185mph.

Total economic and insured losses from Dorian in the Bahamas alone are expected to reach into the billions of dollars, making it the country’s single most expensive disaster event, while combined economic damage in the US and Canada is likely to approach $1.5 billion.

Also in the US, Tropical Storm Imelda made landfall in Freeport, Texas, with widespread flooding and damage to property automobile, infrastructure, and agricultural expected to drive most of the estimated $2 billion economic loss.

Meanwhile, 40,000 homes in Japan were damaged by Typhoon Faxai, initially in the Chiba Prefecture and later many other populated areas, including Tokyo.

The General Insurance Association of Japan has reported that a minimum of 185,000 claims have already been filed.

Other notable events included periods of large hail, damaging straight-line winds, flash flooding, and isolated tornadoes from the Rockies to the Midwest over September 10-12 in the US, with economic losses topping $300 million and insurance expected to cover $240 million.

Tropical Storm Fernand also caused widespread flooding after landfalling in Mexico, with economic costs reaching $215 million in Nuevo León alone, and the overall total thought to be even higher, according to Aon.

Additionally, major flooding in southeastern and central Spain is expected to cause economic losses of at least $2.4 billion and insured losses of $318 million, while flooding in Niger has affected more than 132,000 people.

Notable earthquake events in September were recorded in Albania, Indonesia, and Pakistan, with a combined 76 people killed and more than 12,000 homes damaged or destroyed.

Bermudian insurance and reinsurance firm AXIS Capital Holdings Limited has estimated that it will incur between $150 million and $175...