Reinsurer return on equity forecast at 0.6% for 2020 by Fitch

Analysts at Fitch Ratings have forecast that losses from COVID-19 will severely limit reinsurer’s profitability in 2020, with overall return on equity forecast at just 0.6% for the year.

This would be a major downturn compared with the 9.6% return on equity reported by the market last year. 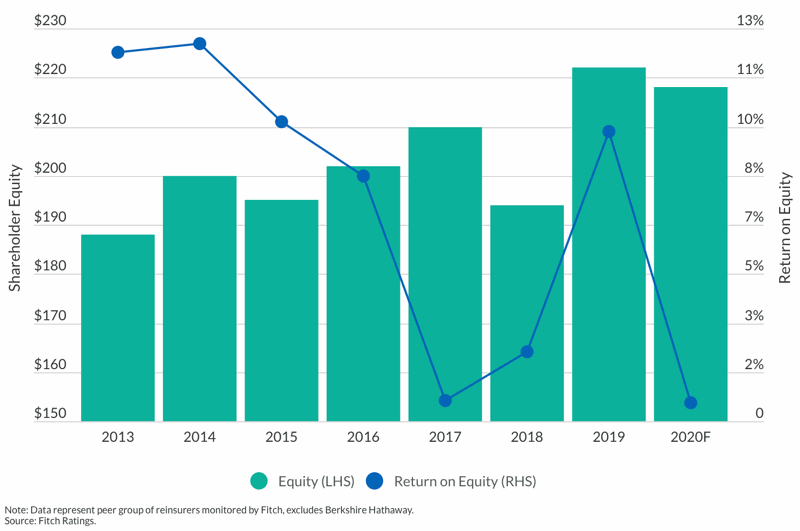 But despite this, shareholder equity continues to remain at a solid level, with Fitch projecting LHS of $218 for 2020, down only slightly from the $222 reported last year.

The rating agency maintained its stable rating outlook on the global reinsurance and North American P/C insurance sectors in March, based on a view that favourable capital adequacy levels will allow the vast majority of insurers to withstand the pandemic fallout.

However, Fitch moved the fundamental sector outlook for both sectors to negative on weaker profit fundamentals and an expected decline in investment and operating performance.

But it noted that capital levels have remained robust as companies have managed downside risk more effectively than in the past, unlike the fallout after Sept. 11 terrorist attacks, which led to a string of insolvencies.

Alongside this analysis, Fitch warned that the recent influx of underwriting capacity could halt reinsurance pricing momentum beyond 2021.

In response, an estimated $5 billion or higher of new equity funds have been raised in the last few months, as companies such as RenRe, Hiscox, Beazley and Lancashire look to take advantage of the improved pricing conditions.

Anna Sweeney, the Bank of England’s (BoE) executive director for insurance, has said that business interruption (BI) related to the...