Global insurer and reinsurer SCOR’s gross reinsurance premiums grew 1.3% from €708 million to €717 million at the mid-year renewals, as the company took advantage of continued market hardening.

The re/insurer notes “strong price growth momentum,” reporting overall 8.2% price increases across its renewal book at the mid-year, with improvements materialising across geographies and lines of business.

According to SCOR, this reflects “the beginning of a “hard” market in treaty reinsurance,” a trend the company is anticipating to continue at the January 1st, 2021 renewals season, with COVID-19 serving as a main driver.

The image below, provided by SCOR, shows the outcome of the reinsurer’s June-July renewals. 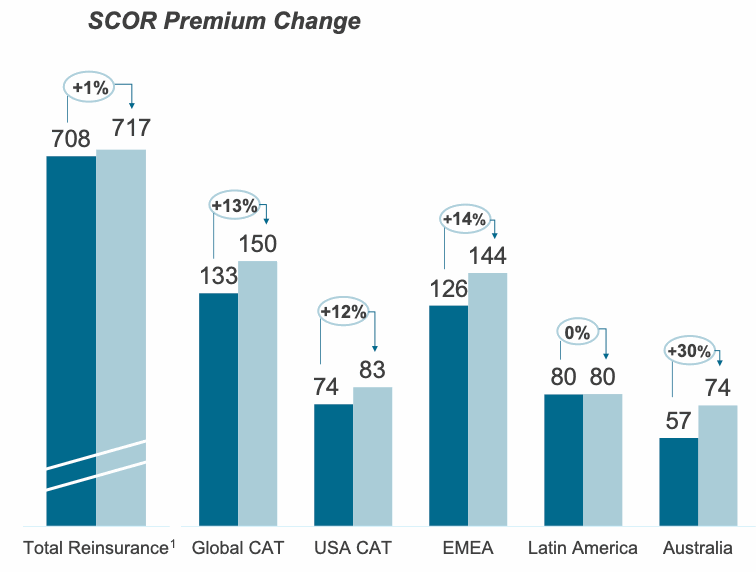 The reinsurer also highlights a strong renewals outcome in its EMEA book, “with growth reflecting a combination of rate increases, incremental shares on renewing programs, and notable new business.”

In Latin America, SCOR says that the renewals were broadly flat while rates improved on contracts and geographies in need of large capacity. In Australia, SCOR says that a successful renewal included strong growth, increase in catastrophe pricing, and also notable non-cat new business.

“Overall renewed premium estimates were directly affected by the current Covid-19 crisis, especially proportional treaties on activity related lines of business such as Credit & Surety and Motor,” says the reinsurer.

The renewals commentary forms part of the reinsurer’s second-quarter 2020 results presentation, in which SCOR reported a net loss of €136 million as the estimated cost of the COVID-19 pandemic booked in Q2 reached €456 million.

P&C insurer Travelers has provided an update on the catastrophe reinsurance treaties it renewed on July 1. The Northeast Property...