Vietnam has suffered a $1 billion loss after Typhoon Damrey made landfall on the 4th of November, 2017, killing at least 108 people and damaging over 300,000 properties, according to insurance and reinsurance broker, Aon. 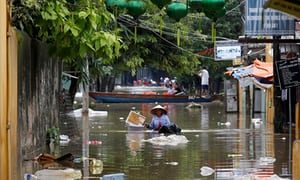 Photo by the Guardian

Typhoon Damrey made landfall on the 4th of November in the country’s south-central coastal region as a Category 2 storm with winds of 135km an hour.

The Vietnamese government estimated total damage at VND22.1 trillion (US$1.0 billion), representing a rare US billion-dollar event for the country.

The event makes 2017 the first time Vietnam’s had a season with a Category 2 (Damrey) and Category 3 (Doksuri) landfall since 1993.

“Additional floods were noted elsewhere in Asia with the return of the annual northeast monsoon, with particular impacts in sections of Sri Lanka, India, Malaysia and Thailand.”

Despite the high economic impact of these events, insurance penetration remains low throughout much of the emerging Asia market, demonstrating the need the continued financial vulnerabilities and the need for affordable re/insurance solutions to facilitate risk transfer to capital markets.