A new report by the CRC notes that the landscape of weather conditions will be “vastly different” this year, as Australia’s climate is now under the influence of the colder climate pattern of La Niña.

Last year, record-breaking temperatures and months of severe drought fuelled a series of massive bushfires across Australia. More than 11 million hectares were devastated and insured losses were estimated at up to AU $1.9 billion (US $1.3 billion).

Accordingly, all eyes in the re/insurance industry will be on Australia as it enters its summer season this year, and the CRC’s report offers some insights into what can be expected of bushfire conditions. 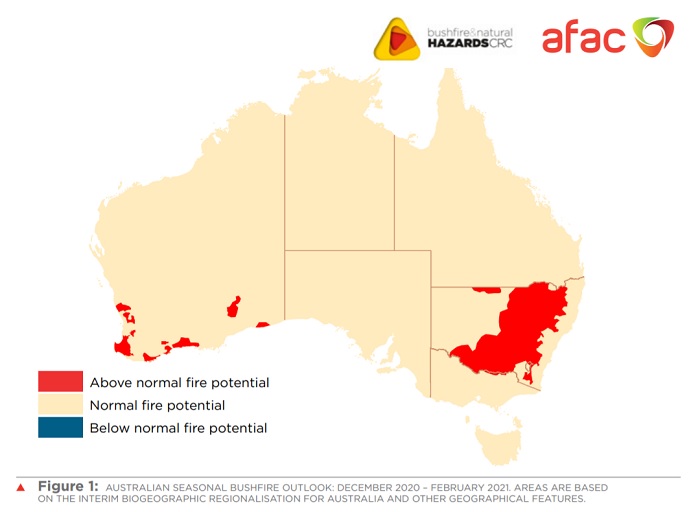 The report observes that year-to-date rainfall has been above average across much of the south east and north west of the country, which has resulted in prolific grass growth in south eastern and central areas.

Grass and crop fires are the main concern in these locations for the summer months as the growth dries out in the warmer weather, and these fires tend to be fast moving and easily fanned by strong winds.

“These conditions mean that large parts of New South Wales west of the Great Dividing Range face above normal fire conditions, as well as grassland areas of the ACT and into north eastern Victoria,” the report stated.

“Western Australia has largely missed out on the rainfall in 2020 and conditions are very dry, with parts of the south and south west coasts expecting above normal fire conditions through summer.”

Although large parts of the east coast were affected by bushfires last season, and wetter than average conditions are expected over this summer, normal fire conditions are still expected for much of these forested areas due to the long-term dryness that still persists and the significant amount of area that was not burnt.

A La Niña is now well established in the tropical Pacific and is likely to persist until at least the end of summer, potentially peaking in December or January.

This will increase the likelihood of above average rainfall across much of eastern Australia during summer and could ease bushfire risk in some areas.

However, south west and southern Western Australia, and some of the southern agricultural areas of South Australia, have not received above average rainfall and have seen increased drought over recent months .

Additionally, the long-term warming trend means that above average temperatures now dominate most years, with September and November 2020 set to be some of the warmest in Australia’s history.

“The tendency for fire seasons to become more intense and for fire danger to occur earlier in the season is a clear trend in Australia’s climate, reflecting reduced and/or less reliable cool season (April to October) rainfall and rising temperatures,” the CRC noted.

Australian BI verdict to drive uncertainty for insurers: AM Best

AM Best has warned that pandemic business interruption (BI) coverage will continue to represent a significant source of uncertainty for...