Analysts at Aon have estimated that global reinsurer capital totalled $660 billion at 30 June 2021, following growth in both traditional and alternative capital.

The figure, which represents a $10 billion increase versus the end of 2020, was calculated based on a broad measure of the capital available for insurers to trade risk with.

For comparison, rating agency AM Best recently estimated that dedicated global reinsurance capacity could be at a level of around $532 billion in 2021, representing a 3% increase over the year-end 2020 figure of $517 billion.

According to Aon’s assessment, traditional equity capital rose by $7 billion to $563 billion over the first six months of 2021, driven by retained earnings. 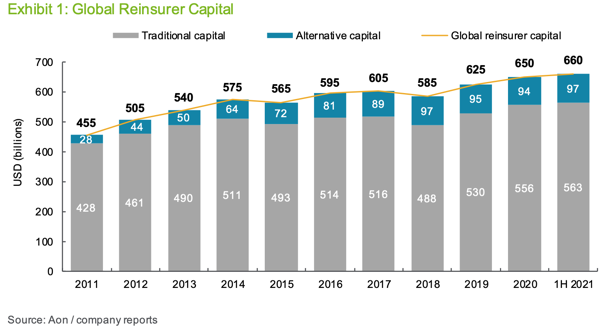 Most reinsurers reported profitable results in the period, aided by the beneficial impact of recent rate increases and strong returns from equities and alternative investments.

And in terms of alternative capital, assets under management in this sector rose by $3 billion to $97 billion over the six-month period.

The broker noted that, after four consecutive quarters of growth, this area of the market has now recovered to the peak level seen at the end of 2018.

Aon’s Reinsurance Aggregate (ARA), which underwrites over 50% of the world’s life and non-life reinsurance premiums, shows that total ARA capital was unchanged at $270 billion at 30 June 2021.

And total equity was similarly flat at $211 billion, with $198 billion attributable to common shareholders, $5 billion to preferred shareholders and $8 billion to minority interests. Total debt was also unchanged $59 billion, resulting in a debt-to-total-capital ratio of 21.9%.