Analysis of the Top 50 Global Reinsurance Groups reveals that, year-on-year, combined ratios trended higher for some of the largest players in the market in 2019 as underwriting profitability dipped for the cohort.

When ranked by unaffiliated gross written premiums (GWP) in 2019, the top ten remains relatively unchanged year-on-year, with Swiss Re leading the pack, followed by Munich Re, Hannover Re, SCOR, Berkshire Hathaway, and then Lloyd’s of London.

China Re, Reinsurance Group of America (RGA) and Great West Lifeco also remain in the top ten, while PartnerRe took tenth position from Korean Re. 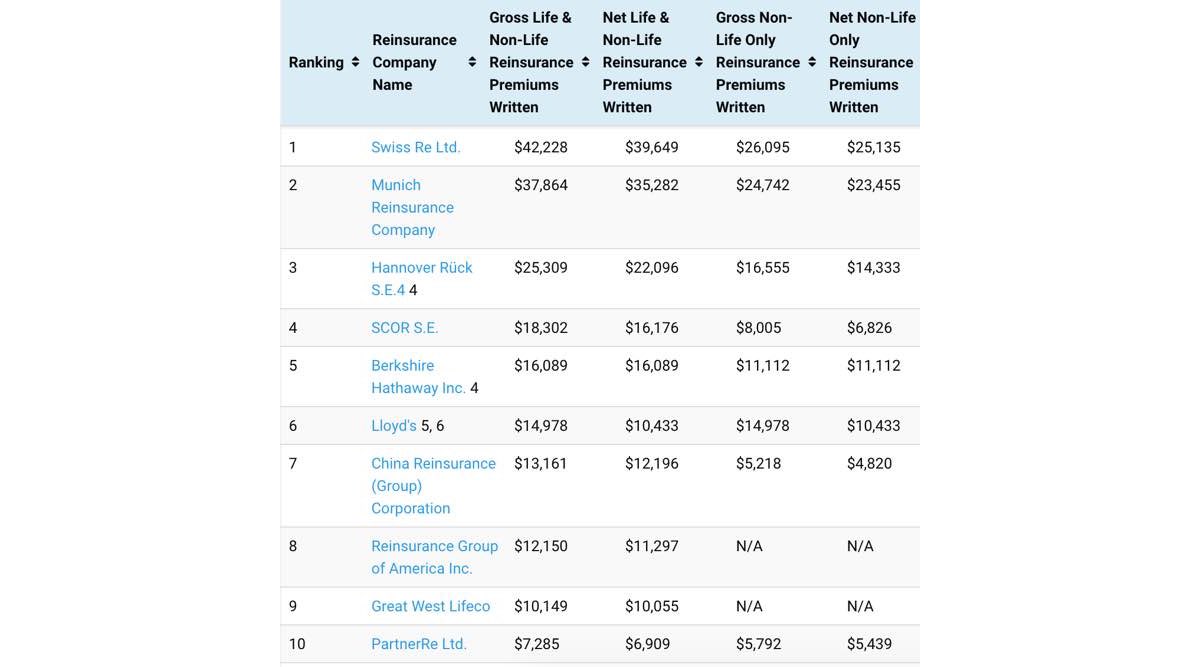 For the most part, GWPs trended higher for reinsurers in 2019, but while companies looked to expand their premium base, combined ratios deteriorated on the back of social inflation in US casualty lines, typhoons in Asia, and also loss creep from 2018 storms.

A look at our Top 50 Global Reinsurance Groups directory, which is based on research data from A.M. Best, shows that of the top ten global reinsurers with P&C operations, the majority saw their combined ratio weaken year-on-year.

At the same time, Hannover Re drifted closer to unprofitable underwriting territory in 2019, reporting a combined ratio of 98.5% versus 96.4% a year earlier. SCOR is the only one of Europe’s big four to report an improved combined ratio for the year of 99%, against 99.3% in 2018.

Berkshire Hathaway’s combined ratio ended the year at 111.7% compared with 110.4% in 2018, while the specialist Lloyd’s of London insurance and reinsurance marketplace saw its combined ratio strengthen to 105.5%, against 106% in 2018.

So, of the top ten global reinsurance groups with P&C operations, so excluding life reinsurers RGA and Great West Lifeco, five saw their combined ratios deteriorate year-on-year in 2019, while three witnessed improvements. Additionally, the data shows that of the top ten, only SCOR and Hannover Re reported combined ratios of below 100% in 2019.

According to A.M. Best, the Top 50 list reported an average combined ratio of 102.4% in 2019, compared with 100.9% in 2018, revealing a year-on-year deterioration in underwriting profitability across the cohort of global reinsurance groups.

Of course, the reinsurance market continues to harden and as a result, price changes should lead to underlying improvements in combined ratios. However, warns A.M. Best, the uncertain impact of the ongoing COVID-19 pandemic could drive a wide variance in performance metrics for reinsurers in 2020.

This directory, which lists the top reinsurers in the world, provides a simple way to analyse the world’s top reinsurance groups.