The Association of Insurance Companies in Lebanon (ACAL) has put the economic losses from the Beirut port explosion at $7.5 billion, according to Elie Tarabay, President of the ACAL and Vice President of the General Arab Insurance Federation (GAIF). 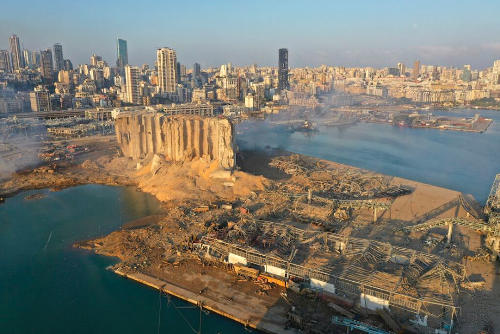 UPDATE: It’s now become clear that the $7.5bn figure has been wrongly reported in the Lebanese press as an insured loss number, and is in fact the latest economic loss estimate. The insured loss estimate for this event continues to range around the US$1 billion to US$1.5 billion mark, we understand.

The blast, thought to have been caused by 2,750 metric tons of ammonium nitrate that was stored unsafely, was large enough to damage buildings several kilometers away and resulted in the deaths of at least 220 people, as well as thousands of injuries.

Much of the port area was totally destroyed, with a crater measuring 140 metres in diameter, partial collapse of the grain silos, total collapse of warehouses and ships overturned.

Following the explosion, Lebanese officials said that the event was likely to drive economic losses of between $10 billion and $15 billion, with insured losses remaining uncertain.

On August 10th, reinsurance broker Guy Carpenter estimated that the insured bill for combined hull, cargo and port facility losses from the blast would likely be less than $250 million.

The following day, a report from Al Roeya claimed that the ACAL had pegged the overall losses from the explosion at between $5 billion and $10 billion, of which around 30%, or as much as $3 billion, is expected to be covered by re/insurance.

Now, Tarabay of the ACAL and the GAIF, during a webinar held by the GAIF on September 30th, 2020, has said that the impact of the Beirut explosion has amounted to $7.5 billion in losses.