The US state of California has taken a step towards securing an insurance policy to protect itself from the costs associated with wildfires and other disasters, following the clearance of legislation by a key assembly committee. 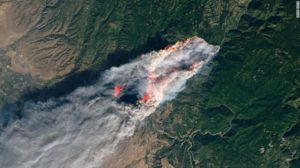 It would function like home insurance, but for the state, with premiums paid by a portion of existing emergency funds.

The policy would trigger a payment to the state in the event of a disaster.

“This bill allows the state to invest in an insurance policy to ensure budget predictability and reduce taxpayers’ exposure to increasing costs associated with disasters, especially wildfires.”

Furthermore, Since 2007, California experienced 11 of the 20 most destructive fires in its history.

“Having insurance for our state budget can help us better prepare before the next disaster strikes.”

Treasurer Ma added, “Today’s action brings us one step closer to giving the governor, myself, and the insurance commissioner the ability to purchase insurance, reinsurance, insurance-linked securities, and other alternative risk transfer products to help pay costs resulting from natural disasters. It makes good financial sense to do this.”

American International Group (AIG) has announced the appointment of Shane Fitzsimons to the newly created role of Global Head of...