A chemical plant explosion has rocked China’s northeastern city of Yancheng, demolishing several factory buildings and blowing out windows a number of kilometres away. 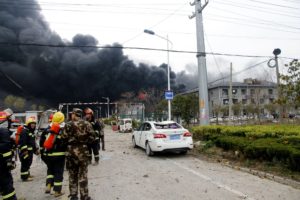 It has been reported that Tianjiayi Chemical, the plan’s owner, has been flagged up multiple times in the past year due to safety regulation failings.

Local media reports indicate that as many as 50 people have died already as a result of the blast, making it one of the country’s most significant man-made catastrophes since the Tianjin port explosions, which claimed over 160 lives 2015.

Swiss Re had estimated the insurance industry would pay for at least $2 billion of damages from Tianjin port blasts, but later increased the estimate significantly, revealing a range of between $2.5 billion and $3.5 billion.

In fact, the Tianjin port explosions were the biggest man-made insured loss ever witnessed in Asia.

The complexity of the loss event highlighted accumulation risks at large transportation hubs and the imposition of an exclusion zone around the blasts also highlighted the difficulty in assessing insurance loss events in some regions of the world.

According to Swiss Re the Tianjin blast event was so significant that it was the third largest man-made re/insurance industry loss ever recorded, behind the Piper Alpha platform explosion which cost $3 billion and the World Trade Center terror attacks.

The exact cause of Thursday’s explosion is still under investigation and it’s certainly too early to speculate an industry loss.

President Xi Jinping has since called for an “all-out effort” to aid those injured in the explosion and stated that authorities must learn lessons to prevent future accidents.

Munich Re is expecting to incur losses in the range of €100 million to €120 million as a result of...