CoreLogic puts private market Barry losses at up to $600mn, NFIP at $200mn

CoreLogic’s estimates are significantly higher than those from RMS, who said earlier today that industry losses would not exceed $500 million, with around half of that figure expected to be NFIP losses.

The lower end of the estimate, however, is in line with estimates from Karen Clark & Company (KCC), which put industry losses at close to $300 million, excluding NFIP losses.

Barry was the second named storm of the 2019 North Atlantic hurricane season. It made landfall in Louisiana on Saturday as a Category 1 hurricane with maximum sustained winds of 75mph before shortly dropping back into tropical storm territory.

Flood damage is expected to be a major driver of loss from Barry, due to its slow-moving pace, which resulted in heavy rainfall and storm surge in impacted regions.

However, CoreLogic believes that wind damage could drive the majority losses, with wind alone responsible for $300-500 million of damage according to its estimate. 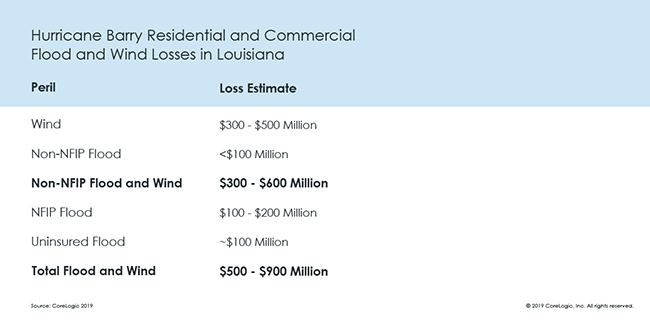 Uninsured losses are also surprisingly low at just $100 million, with CoreLogic claiming that less than 20% of residential flood loss will go uninsured.

Louisiana has the third highest number of NFIP policies-in-force in the U.S., with approximately 500,000 residential and commercial property policies across the state, many of which cover areas impacted by storm surge or inland flooding from Barry.

Total flood loss for residential and commercial property in Louisiana is estimated to be between $200 and $400 million.

CoreLogic’s analysis accounts for residential homes and commercial properties, including contents and business interruption, although it does not include broader economic loss from the storm.

Additionally, the inland flood analysis is based on the rainfall for 72 hours ending on Monday, July 15, and thus excludes the rainfall from a separate weather system in the days leading up to Hurricane Barry’s landfall.

Representatives from Guernsey Finance, the promotional agency for the island’s finance industry, have argued that common misunderstandings about Solvency II...