Analysts at Jefferies have estimated that re/insurance industry losses from catastrophes were 16% below the long-term average in December 2020.

Amongst these losses, winter weather and severe storms featured as the most prominent perils, accounting for 71% of the total insured losses.

Relative to prior years, December wildfire losses were lower, especially if the December 2019 to January 2020 Australian wildfires are included in the comparison period.

Jefferies noted that the rising frequency of small severe and winter weather events this year may have led to a higher proportion of losses remaining on insurers’ balance sheets.

However, the aggregation of small losses may see that trend shift in Q4 if aggregate reinsurance covers are reached resulting in catastrophe ratios slightly exceeding budget.

Severe and winter weather events in the US were seen the most material drivers of insured losses in December, with above average frequency of mid-size storms. The damage was widespread across the Plains, Midwest, South East and North East regions of the US, and was caused by a mix of thunderstorms and snow storms. 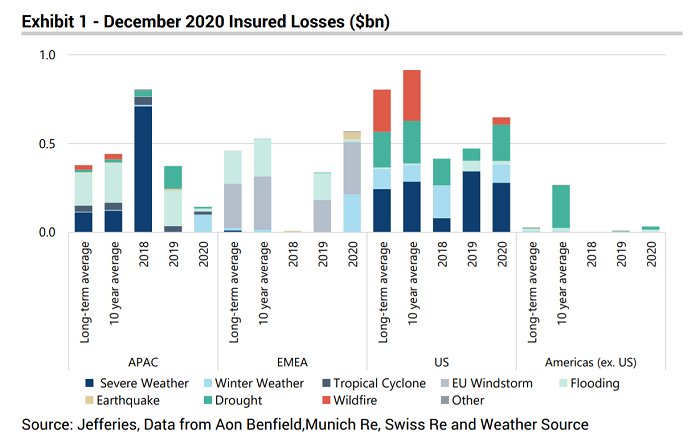 Outside the US, Windstorm Bella and winter weather in general were identified as the key contributors to insured losses in the EMEA region.

In total, Jefferies estimates that Windstorm Bella cost re/insurers around $294 million, which is only marginally higher than its estimate for the sum of winter weather events at $215 million.

On this point, analysts warned that that “the aggregation of smaller storms (often overlooked by investor forecasts) can in itself equal the cost of more memorable events.”

Hurricanes Laura, Delta and Zeta promoted insurers to pay or reserve $7.7 billion on claims in Louisiana throughout 2020, according...