Reserve releases in the P&C sector slowed in the second-quarter of 2017, a trend that is expected to persist and intensify through the remainder of the year, eating into companies’ earnings, according to analysis from Morgan Stanley.

Morgan Stanley analysts warned earlier in 2017 of a $2.5 billion P&C sector reserve deficit, predicting reserves to decline further as the soft market environment persists. And now, analysts have noted further deterioration in the second-quarter of 2017, with a number of P&C carriers tracked by Morgan Stanley missing earnings in Q2, driven in part by slower reserve releases.

Certainly some companies have been more aggressive than others with their reserving practices in the current cycle, but the general trend is that now reserves are declining, meaning companies have less of a buffer to call upon should catastrophe losses increase from the relatively benign experience seen in more recent times. 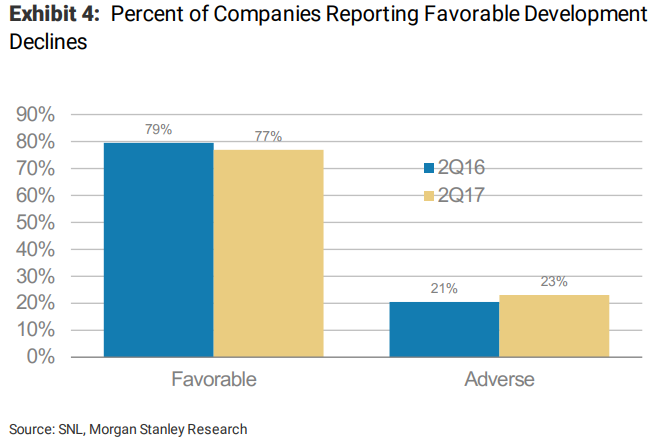 “We expect reserve releases to slow further in 2017…We believe the risk of adverse development will continue to rise over the next 12-24 months, particularly in Other Liability and Commercial Auto Liability,” says Morgan Stanley.

Over the last seven years, Morgan Stanley explains that reserve releases accounted for around 20% of the P&C industry’s earnings, meaning that the expected slowdown and continued deterioration will drive an earnings headwind for companies.

“We believe industry is deficient for the first time since our 2009 analysis, and expect reserve releases to slow in future period,” says Morgan Stanley.

Sompo International has rolled out a new platform for systems and data integration in the London Market, Guidewire PolicyCenter’s underwriting...