Marsh has released its Global Insurance Market Index for the fourth-quarter of 2016, showing insurance rates continued to moderately decline on average across all major, global business lines.

Global property insurance rates provided the exception to the trend of more moderate declines, falling by 4.2% in Q4, this compares to a decrease of 3.9% in Q3, 2016. That the steepest decline occurred in the property space isn’t too surprising as this area continues to feel the greatest impact from the oversupply of reinsurance capital and a lack of nat cat events.

With pressures in the global reinsurance market persisting, both traditional and alternative capital providers are increasingly looking to access primary business in an effort to improve returns. This has contributed to declines in the primary space, and with the market landscape showing little sign of changing anytime soon, reinsurance capacity will likely continue to add pressure to global insurance rates in the months ahead.

On average, global insurance rate decreases moderated for the fourth consecutive quarter, down 3.1 % in Q4 compared with the previous quarter’s decrease of 3.2 %. 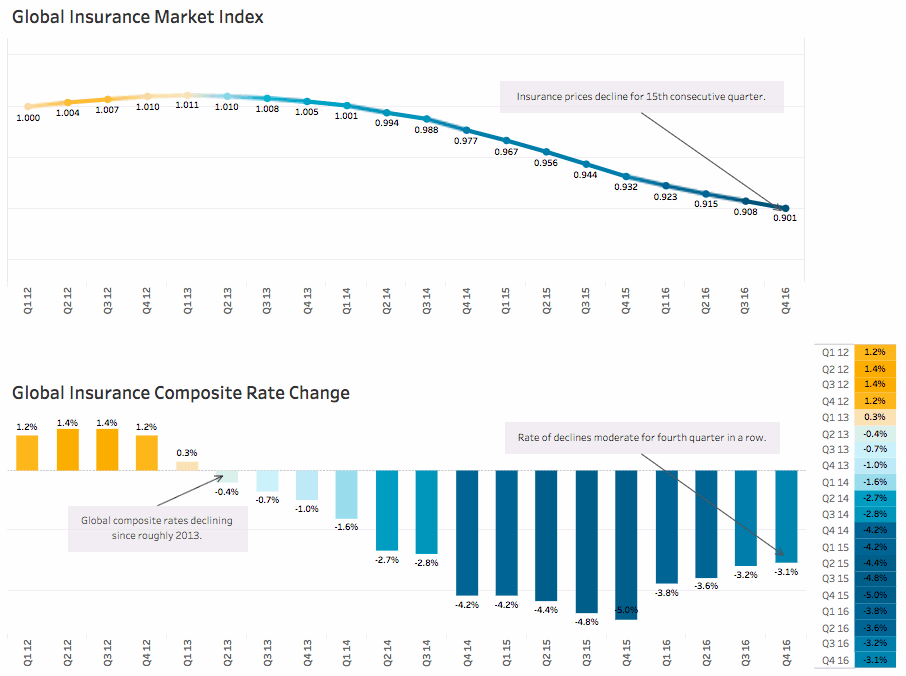 The global reinsurance market remains soft and capacity, from both traditional and alternative sources, continues to filter down into primary lines searching for profit away from the highly competitive and overcapitalised property catastrophe space.

Global casualty rates saw rate of decline decrease at 1.9% in Q4, down from 2.4% in the previous quarter, and financial and professional lines decreased on average by 3%, a similar level to the prior quarter.

Although insured losses shot up to $50 billion last year, this wasn’t enough to turn a market saturated with an abundance of capital, and the pricing environment remained generally soft, says Marsh.

The slowing of rate decreases in the global insurance and reinsurance market suggests that the market could be nearing a pricing floor, but with a lack of large losses and the continued influx of reinsurance capacity it could be some time before rates begin to turn.

But according to Marsh, a pricing trend reversal could be witnessed in the not-too-distant future; “early indications that capacity may be moderating and that combined ratios may be increasing could be harbingers of looming rate increases as carriers seek to boost profitability and keep combined ratios below 100%.”

With the ongoing challenges of the soft market trend, reinsurance and insurance firms have been arming themselves to overcome the stiff competition with a greater focus on product innovation and coverage customisation.

And as new and emerging complex risks in areas such as climate change, cyberspace, and terror cover are creating increased demand for insurance and reinsurance, industry players are set with the task of evolving to rise to the challenge of 2017’s changing geopolitical and technological landscape.