Insured catastrophe losses totalled just $20 billion during the first half of 2019, marking the lowest level of average losses since 2006, according to re/insurance broker Aon.

Aon recorded a minimum of 163 natural disaster events in the first half of 2019, which was below the 21st Century average of 180. 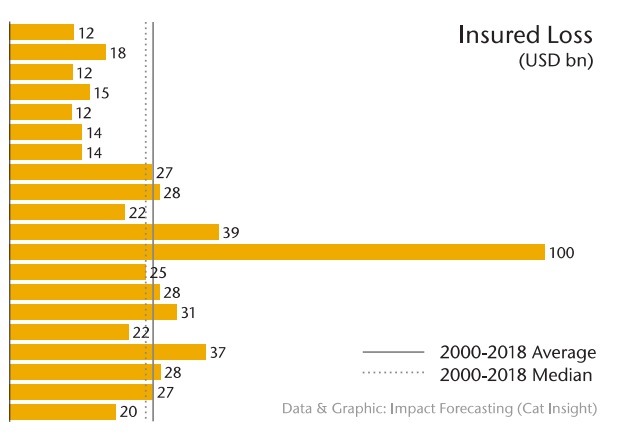 The first six months of the year were marked by many small and medium-scale disasters, which impacted many communities around the world, but were not historically significant from a financial loss view.

This was evident in the Europe, Middle East & Africa (EMEA) region, which experienced 50 recorded disasters, and in Asia-Pacific, which, at 45 recorded events, had the second lowest level of H1 disaster since 2000.

In contract, the US saw its second-highest number of events since 2000, with 37 recorded disasters, while the Americas (Non-US) experienced 20 disasters.

According to Aon, flooding and severe weather (thunderstorm) perils were the primary driver of economic and insured losses in H1 2019, and were the only perils that showed higher-than-average losses, compared to the 21st Century baseline.

There were at least four individual billion-dollar events for the re/insurance industry in H1 2019, consisting of three severe convective storms in the U.S, and January’s Windstorm Eberhard in Europe.

Analysts also stipulated that there are likely to be upward revisions of total insured payouts for the period in both the US and Europe due to some large scale events in June and going into July, which will result in an extended period of farmers taking stock of damage to crop harvests and potential yields.

Tech-driven underwriting agency iprism has promoted Kris Meadows to lead its nationwide network of broker development managers (BDM). At the...