Warren Buffett of reinsurance and investments giant Berkshire Hathaway said today that he expects that the insured loss from hurricane Harvey will be large, but uninsured will eclipse it, while also admitting that his auto insurer Geico could face a similar impact to the one it suffered from superstorm Sandy. 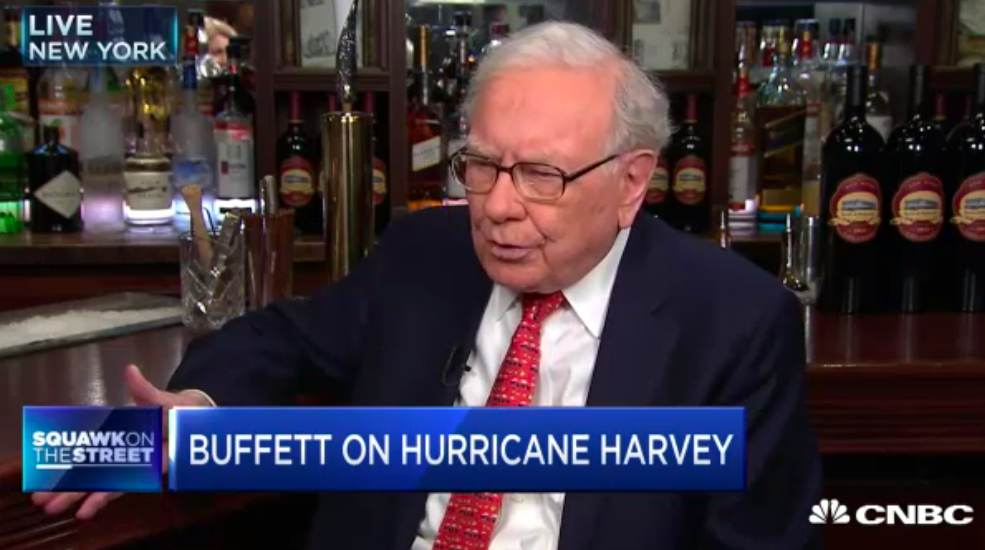 Speaking to CNBC today, Warren Buffett expressed disbelief at the scale of the disaster unfolding in Texas.

“It’s sort of unbelievable, 14 trillion gallons of water being dropped from the sky. It’s staggering,” he said.

“The insured loss will be large, but there’ll be a lot of uninsured loss too,” he continued, adding that a lot of people have coverage with the NFIP but the majority of the flood exposure could go uninsured.

“In the case of our particularly company, we write about 10% of the auto insurance in Texas,” he said referring to Berkshire Hathaway’s Geico subsidiary. “If you have comprehensive insurance which covers flood, and about 70% of people who buy auto insurance get that, then you may well have a total loss.”

Buffett then went on to explain that Geico could face a loss of the magnitude it saw after superstorm Sandy.

“We have about 500,000 cars insured in that area, around 10% of the total, and we don’t know at this point but I wouldn’t be surprised if we had 50,000 losses, and most of them would be total losses,” he said, adding that this would be about the same amount of losses as Geico saw from Sandy.

When asked what he thought of insured loss estimates suggesting the re/insurance market could face $10 billion to $20 billion of losses from hurricane Harvey, while the economic loss could be as high as $150 billion, Buffett said “Nobody has too good a feel, but those don’t strike me as silly in any way.”

“There will be a high proportion of uninsured losses to insured losses, compared to most events,” he continued. “Fortunately they did have a fair amount of warning on this, so there was a fair amount of evacuation took place. But it’s just gotta be devastating. The effects of this are going to go on for a very long time.”

When asked about the exposure that Berkshire Hathaway could have in its reinsurance book, Buffett said it would be much less that had the storm occurred ten years before.

“Not like we used to. We used to write a lot of what we called super-cat and then they didn’t have any hurricanes for a long time, so the rates kept coming down and down,” Buffett explained.

“The wind doesn’t know what the rates were, so if you get the wrong rate on an insurance you’re going to lose money over time, so we got out of the super-cat business pretty much entirely. So it does not hit us big in reinsurance like it would have ten years ago,” he concluded.

The unknown then is the Berkshire Hathaway Specialty subsidiary and what its exposure could be to commercial and specialty risks in the Texas region. Given the market share of the insurer and its aggressive growth into some areas of the U.S., it makes sense that Berkshire Hathaway will take a sizeable loss from its specialty business and commercial underwriting as well.

But, right now Buffett is focused on making sure his insurance and reinsurance companies are responding to hurricane Harvey in the right manner.

“It’s how you perform at a time like this that really defines whether your insurance company is doing the right job,” he said.

Moody's Analytics has updated its economic cost projection for southeast Texas to between $51 billion and $75 billion, as catastrophic flooding...