Karen Clark & Company (KCC) has provided an insurance industry loss estimate of just under $30 billion for the damages caused by the impacts of hurricane Maria, with the majority of the loss coming from Puerto Rico. 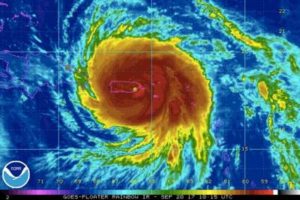 KCC’s insured loss estimate is based on Version 1.0 of its high resolution Caribbean Tropical Cyclone model, and includes wind losses to residential, commercial and industrial properties. Property losses, explains KCC, were increased by 20% in order to account for auto losses, insured flood damage, and any additional demand surge.

Hurricane Maria devastated numerous parts of the Caribbean, although Puerto Rico experienced the most severe damage. KCC estimates that of the $29.797 billion insured loss total, $28.350 billion, or over 95% occurred in Puerto Rico.

$789 million of the loss from the U.S. Virgin Islands, $445 million occurred in Dominica, $119 million in Guadeloupe, with the remaining $94 million occurring in other territories, according to KCC analysis.

The storm was the strongest to hit Puerto Rico since San Felipe II Hurricane that struck the region in 1928, and KCC explains that the decay for both hurricanes was very similar as they passed over Puerto Rico.

According to KCC analysis, were San Felipe II to occur today, it would result in similar insured losses in Puerto Rico as that driven by hurricane Maria.

KCC’s estimate comes after RMS provided an insured loss range of between $15 billion and $30 billion, and AIR Worldwide’s huge insured loss estimate for Maria of up to $85 billion.