As hurricane Michael tracks towards the Florida Panhandle area of the Gulf Coast as a major storm, analysis by catastrophe risk modeller RMS reveals that in almost 70 years, just two hurricanes have made landfall within the current ‘cone of uncertainty’ with category 2+ strength.

RMS notes that over the last 24 hours, the National Hurricane Center’s (NHC) ‘cone of uncertainty’ and other model solutions have determined a landfall on Wednesday afternoon near Panama City, Florida.

Clearly, there remains uncertainty about the track and intensity of the storm as it approaches the Florida coast, but the storm is expected to strengthen as wind shear reduces, with sea surface temperatures being 1-2 degrees Celsius above average.

According to RMS, since 1950, only hurricane Kate (1985, Category 2) and hurricane Eloise (1975 Category 3) have made landfall within the NHC ‘cone of uncertainty’ with category 2 strength or greater.

Hurricane Michael is currently forecast to make landfall as a category 3 storm, so similar to hurricane Eloise, which, incurred estimated insured losses of $3.6 billion, according to RMS’ historical benchmarks.

It’s important to remember that these aren’t RMS estimates but only historical benchmark figures, and also that while the strength of Michael and Eloise might well be similar, or very different for that matter, at landfall, the economic and importantly insured loss impact could be vastly different owing to factors such as insurance penetration rates and increased asset values.

RMS’ historical benchmark figures focus on wind and storm surge losses, likely as this is expected to be what drives hurricane Michael losses. The storm is fast-moving, which lowers the chance of high rainfall totals but also ensures the storm maintains some intensity farther inland, suggesting its overall wind swath could be broad.

At the same time, Florida’s Big Bend region is susceptible to high volumes of storm surge from hurricanes as a result of its shallowly sloped coastline.

“Severe storm surge is a possibility over a large portion of the Florida panhandle, with the highest surge expected to the right of the storm’s track. Current projections show large swaths of storm surge greater than nine feet above ground forecast across the region,” says RMS. 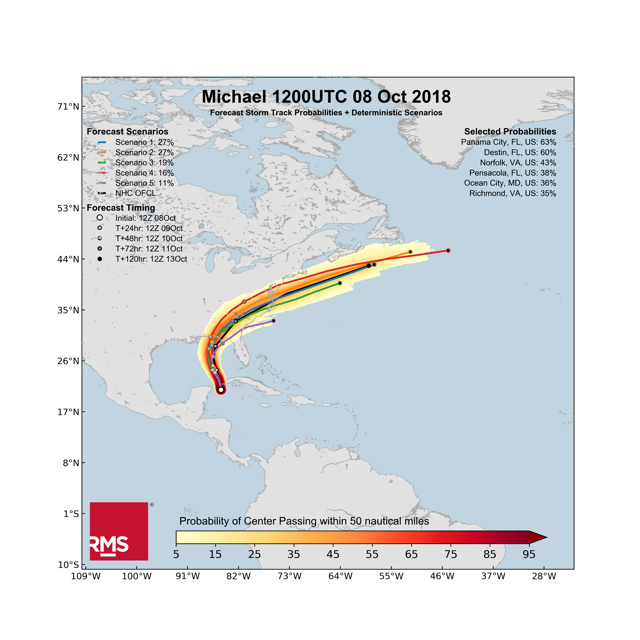 Global Lloyd's insurance and reinsurance broker RFIB Group Limited has announced the appointment of Elizabeth Jenkin as Managing Director of...